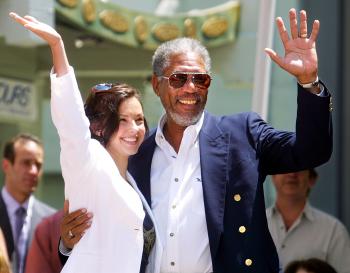 Actors Morgan Freeman and Ashley Judd who stared together in the 1997 thriller 'Kiss the Girls' and the 2002 crime-drama 'High Crimes,' could come together one more time in the new live-action/3D movie 'Dolphin Tale.' (Lee Celano/Getty Images)
Entertainment

The Hollywood Reporter said on Aug. 4 that the three actors are in negotiations to star in the Warner Bros./ Alcon Entertainment film directed by Charles Martin Smith.

The movie will center around a boy that becomes friends with a dolphin that loses its tail, and the boy rallies to save the aquatic mammal by creating a prosthetic limb to replace the tail.

The movie is based on a true story of a dolphin that was rescued near Florida and taken to Clearwater Marine Aquarium.

If the talks go through, this will be the third time Judd and Freeman have worked together on film. They appeared together in the 1997 thriller Kiss the Girls and the 2002 crime-drama High Crimes.

Connick Jr. is slated to play a vet who brings the dolphin to a animal hospital, Judd could play the boy's mom, and Freeman would play the doctor who helps with the prosthetic appendage, said the Hollywood Reporter.