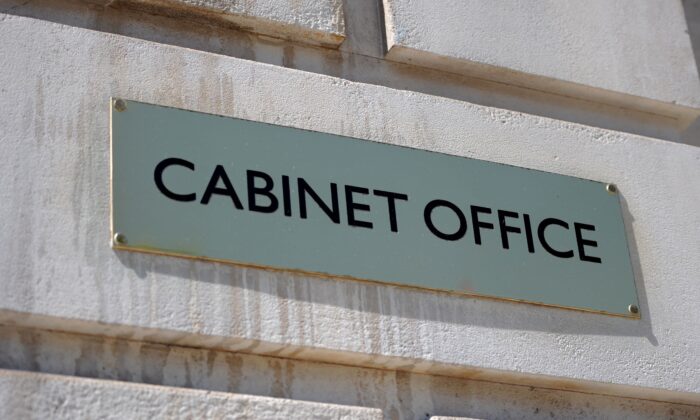 A select committee of MPs has criticised the Cabinet Office over its “poor” handling of Freedom of Information (FOI) requests, calling for greater transparency of the process.

The Public Administration and Constitutional Affairs Committee (PACAC) on Friday published the report of its inquiry into the “Freedom of Information Clearing House”—a body within the Cabinet Office that assists with the processing of FOI requests—urging the Cabinet Office to agree to an independent audit of the Clearing House, and to “improve the tone from the top [of the government] and drive stronger FOI culture through proactive leadership.”

The Clearing House, which was little known by the public, came under scrutiny after independent media platform openDemocracy made a complaint to the Information Commissioner’s Office (ICO) in 2019 over the Cabinet Office’s refusal to disclose an FOI list operated by the Clearing House.

The Cabinet subsequently released most of the information requested, but the tribunal proceeding had drawn attention to “both the Cabinet Office’s stated responsibility to make the way government works more transparent and the absence of information on the Clearing House,” the report said.

The government published limited information on the Clearing House, which former Chancellor of the Duchy of Lancaster Michael Gove said was a three-person team, on March 18, 2021, with some details included in job adverts from April 2020, the report said, but further details on the body’s operations and how effectively it operates remains opaque to the ICO and the public.

The report said the information released on the Clearing House “fell short of earlier public disclosures” on the body when the responsibility for it rested with the Ministry of Justice, which oversaw FOI policies until the responsibility was transferred to the Cabinet Office on July 17, 2015.

MPs criticised Cabinet Office’s “disappointing” decision to reject ICO’s offer of an external audit of the Clearing House, saying it was “misjudged given the Information Commissioner’s Office’s Freedom of Information expertise and, importantly, the Commissioner’s independence.”

They also said it was “unacceptable” that an internal review—promised by the Cabinet Office on Aug. 31, 2021—is yet to have its reviewer appointed and its terms of reference finalised.

The committee also accused the government of lacking a proactive approach that advocates for the FOI Act more generally.

Citing the government’s decision to exempt the new Advanced Research and Invention Agency (ARIA) from the scope of the FOI Act as an example, the report quoted Business minister Martin Callanan, who told the House of Lords that FOI is a “truly malign piece of legislation” when introducing legislation to underpin ARIA.

MPs called for the “greater leadership from the Cabinet Office as the sponsor department for the Act and FOI policy,” and recommended the government revisit its decision the exempt the ARIA, saying the exemption is “a slide away from transparency being viewed as helpful towards a view that it is a hindrance” and a “concerning trend.”

Commenting on the scathing report, Conservative Chair of PACAC William Wragg accused the Cabinet Office of dragging its feet over the matter.

“Our Freedom of Information laws are a crucial part of our democracy, allowing citizens to hold [the] government to account,” Wragg said in a statement.

“As FOI policy owner and coordinating department, the Cabinet Office should be championing transparency across government, but its substandard FOI handling and failure to provide basic information about the working of the coordinating body has had the opposite effect,” he said.

“An internal review alone won’t be sufficient to restore trust. The government must go further and allow for an independent audit of its practices such as the one offered by the Information Commissioner. The Cabinet Office has dragged its feet for too long on this issue and must act now to remove suspicion around the Clearing House, improve compliance with FOI laws, and regain public confidence.”

The government is also urged to address concerns about the use of WhatsApp and other private messaging systems to evade the FOI Act.

The Cabinet Office didn’t respond to The Epoch Times’ request for comment.