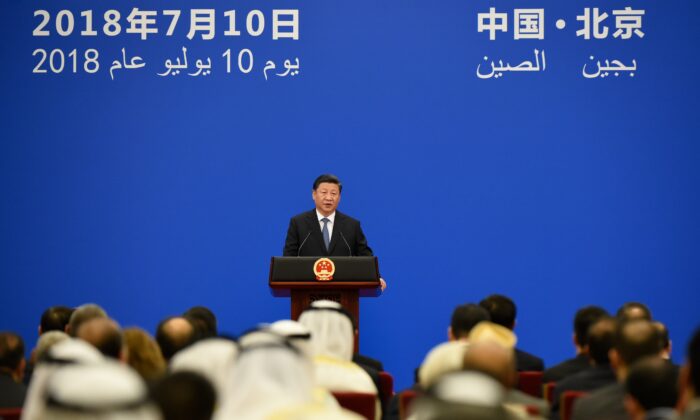 China's leader Xi Jinping gives a speech during the 8th Ministerial Meeting of China-Arab States Cooperation Forum at the Great Hall of the People in Beijing on July, 10, 2018. At the time, China said it would provide Arab states with US$20 billion in loans for economic development, as Beijing seeks to build its influence in the Middle East and Africa. (Wang Zhao/AFP via Getty Images)
Thinking About China

More Than Oil: China Expands Its Influence in the Middle East

As the world’s largest energy importer, the Middle East engages with China through infrastructure investment and trade, as well as nuclear development, in exchange for oil and international political support.

Over the past decade the United States has shifted its focus away from the Middle East, concentrating more on China. Ironically, this has left the region open for China to increase its trade, investment, and influence. China has signed partnership agreements with 16 Middle Eastern countries. According to the Beijing’s 2016 “Arab Policy Paper,” China’s engagement with the Middle East follows the “1+2+3” cooperation scheme, where “1” is energy, “2” is trade and investment, as well as infrastructure construction, and “3” is nuclear energy and satellites.

The Chinese Communist Party (CCP) takes a cautious approach to the security and political challenges of the Middle East, steadily increasing its investment and trade through the Belt and Road Initiative (BRI, also known as “One Belt, One Road”) as well as through security exchange, while largely steering clear of becoming entangled in regional geopolitics.

Since 2015, China has been the world’s largest importer of crude oil—with about half of it coming from the Middle East. Consequently, China’s closest relationships in the region are with the oil-producing Gulf states. In 2016, China became the largest foreign investor in the Middle East. In 2017, trade reached just under $197 billion, according to the International Monetary Fund.

The top crude exporters to China are Russia, Saudi Arabia, Angola, Iraq, and Oman, followed by Brazil, Iran, and Kuwait. China’s brand of authoritarian capitalism focuses on raw material extraction, which has implications for regional stability as it reinforces autocratic regimes. Where U.S. foreign policy has been predicated on cultivating peace through democracy, the CCP’s 2016 “Arab Policy Paper” stresses peace through development.

The CCP’s strategy in the Middle East is similar to its approach in other parts of the world, namely, interacting with countries for the purpose of obtaining energy in exchange for cash, infrastructure investment, and trade—but not making demands for increased democracy or human rights. The CCP is also careful to remain outside of regional conflicts, forming close relations with both Hamas and Israel. Functioning under the protection of the U.S. security umbrella and its own policy of nonintervention, the CCP has been able to benefit from investments in the Middle East, without contributing to the public good.

In the “Arab Policy Paper,” the CCP proposes to invest in Middle Eastern countries in petroleum and natural gas, oil prospecting, extraction, transportation, and refining. Additionally, the Paper states that the Middle East and China will cooperate on the BRI—with infrastructure construction and investment in railways, highways, ports, aviation, power, communications, and satellite ground stations.

The China and the Gulf Cooperation Council (GCC) launched the China-GCC Free Trade Agreement in 2004. The Paper reaffirmed the CCP’s objection to trade protectionism as well as its dedication to the removal of non-tariff trade barriers. As of 2021, China and the GCC are still negotiating a free trade agreement.

The CCP is committed to China-Arab cooperation on designing and building nuclear power plants, scientific research, nuclear fuels, reactors, nuclear security, and space exploration. China has largely stayed out of Iran’s nuclear program for many years. But when the Biden administration imposed new sanctions on two Iranian government agencies and several officials on Dec. 7, 2021, Beijing criticized the move and pushed for sanctions to be lifted.

Two Chinese companies are building a nuclear facility in a remote desert location of Saudi Arabia, near the city of Ula. When completed, the plant will be able to extract yellowcake from uranium ore. Yellowcake uranium is an integral component used for both civilian nuclear power and nuclear weapons. The United States is concerned that this nuclear fuel could be enriched to produce bombs. Saudi Arabia has planned to build 16 nuclear power reactors over the next 25 years. At a cost of $80 billion each, this could be an incredible revenue stream for the CCP.

Saudi Arabia had been in negotiations with the Trump administration over building a nuclear program, but the United States required the Kingdom to sign on to the standards of the International Atomic Energy Agency (IAEA). The Kingdom had been counting on the U.S. desire to counter Iran by allowing Saudi Arabia to have a nuclear program, without meeting IAEA requirements. When the Saudis realized that this would not happen, they turned to China, which made no such demands.

In return for trade, investment, and nuclear program support, the CCP requires the Middle East to abide by the “one China” policy. Additionally, Middle Eastern countries must agree to not form diplomatic relations with Taiwan.

In international affairs, the “Arab Policy Paper” says that China and Middle Eastern countries should “support each other on issues of core interests or major concern,” including voting at the United Nations. And, while not specifically stated, it is understood that the CCP expects Arab countries to remain silent on charges of genocide against Uyghur Muslims in China’s Xinjiang region.