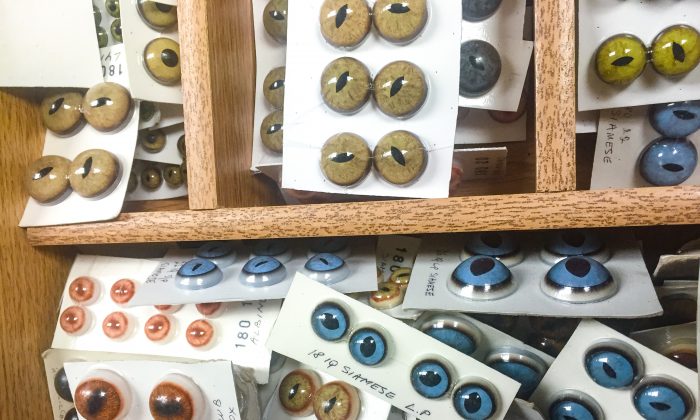 SELLERSVILLE, Pa.—When I walked into the corporate office of Tohickon Glass Eyes, the company’s vice president, Tony Alfaro, was sitting behind a well-organized desk, wearing a shirt and tie. My first impression was that this was a small, well-run company in rural Pennsylvania that just so happened to make the world’s best eyes for taxidermy animals.

But soon I learned that the 40-year-old, family-run business nestled in Bucks County near the Delaware River has a history that could make for a Hollywood film, if a quirky one.

The word “tohickon” comes from the language of the local Lenape tribe, and some say it means “place of the deer.”

On a tour of the factory, Alfaro takes me to one of the production rooms, where he examines a tray of olive-brown deer eyes and discusses them with one of the factory employees. He later tells me that, true to the company’s name, the white-tailed deer is its bread and butter—the biggest seller, by far. Following that, the next four biggest sellers are bear, boar, bobcat, and fox.

What they do here at Tohickon involves a vast and almost unimaginable network, connecting artists, hunters, animal lovers, museum curators, cryptozoologists, and more. The company makes perfectly replicated, hand-tinted glass eyes for your every animal reproduction or taxidermy desire: from large mammals, fish, and birds, to fantasy beings, dinosaurs, and even zombies (no pupils).

They sell half a million pairs of eyes per year, available in 20,000 variations.

A visit to their factory will prove you’ve likely never given enough thought to the beauty and unique designs of animal eyes. Browsing the catalog, my gaze fell upon the design of a snapping turtle’s eye: coppery gold, with four black, petal-like shapes framing the pupil. A bullfrog’s pupil is allantoidal—sausage-shaped.

If you need to create fish, like largemouth bass, palomino trout, salmon, and more, Tohickon offers a series of fish eyes in shimmery hues, made by hand in Germany and painted here in the United States. You can also get eyes in various states of pupil dilation, as well as albino and even leucistic eyes for virtually any animal.

The level of detail in the work is breathtaking. The walls are lined with hundreds of boxes of the gleaming creations, resembling beads or jewels, with every conceivable ocular detail built in—a protruding cornea, a compound lens shape, or, say, a series of white bands painted from the inside on a coyote eye, giving it a “wet look.” It’s like a secret, magical world of obsession and precision.

“Glass is perfectly suited for eyes, because what we are recreating is a very aqueous part of the body, [and] glass has been called a supercooled liquid. In perception, we think of it as a solid, but in fact, it is moving more than you think,” said Alfaro. “If you look at 150-, 200-year-old American buildings with the original windows intact, the windows are thicker at the bottom than at the top. In some cases, the glass has even begun to move over the wood a little bit.”

Though world famous as creators of award-winning glass eyes, Tohickon also sells textured glass tiles, made from raw glass purchased from Germany and from local suppliers in Pennsylvania.

When I ask Alfaro about the origins of Tohickon, how it all came to be, he smiled cryptically. “It’s quite a story,” he said.

His wife’s father, John Crossley, started the company in the 1970s. Crossley was an inventor and a composer—and a self-styled liberator of tortured political prisoners in communist Eastern Europe, particularly from Romania, which at the time was under the repressive rule of the notorious dictator Nicolae Ceausescu.

In September 1971, Crossley was working a dead-end job as a night watchman at a water treatment plant. While making his normal security rounds one evening, he stopped outside and looked up at the sky, wondering what to do with his life, and telling himself he needed a money-making enterprise. At that moment, two pheasants struck a power line and fell down dead at his feet.

Crossley had grown up hunting and trapping in the wilderness of Pennsylvania, and that night, he decided he would open his own taxidermy business. Those two pheasants were his first taxidermy clients.

But while buying stock for his new venture, Crossley immediately became frustrated with the poor quality of the glass eyes. “At the time, the eyes that were available were just glorified marbles,” said Alfaro.

Since Crossley was an inventor, he got busy making his own eyes in June 1972. He failed many times in trying to find suitable techniques for coloring the eyes—early attempts resulted in the eyes turning silver, for example. But Crossley was beloved by the community, being known for his warm and charming character, so all the locals wanted him to succeed. After he had a salable product, he marketed it door to door to taxidermists.

Meanwhile, as Crossley continued to develop his new business, he took the whole family, including Alfaro’s future wife, Jessie, her mother, Barbara, and Barbara’s three children from a previous marriage, on frequent trips to Ceausescu’s Romania, to smuggle in cash, Bibles, and other items banned by the communist regime. The Crossleys would work to locate political prisoners, whose release they would later secure from back in the United States.

Crossley himself was captured, beaten, and interrogated by the secret police at gunpoint. During one trip to Slovakia, there was an attempt on his life in retaliation for his human rights work. Two men in masks snuck into his hotel room one night and tried to stab him in his bed. He was able to wrestle the knife away, and the men fled.

It’s no surprise, then, that one turning point in Crossley’s business coincided with his growing determination to liberate political prisoners from Romania.

In 1986, he learned that a few women had just been detained and were being tortured in a Romanian prison. He immediately wanted to help. He decided to place an ad in The New York Times calling for a boycott of Romanian goods until the women were released, but his heart sunk when he learned that a full-page ad would cost $14,000.

A friend then suggested that he take out a quarter-page ad on the Washington page of the newspaper. For that, he needed $7,000. He borrowed money on all of his credit cards to place the ad for just one day, and then, as luck would have it, a famous taxidermist handed him a job for precisely that amount the very same week. It was the largest order he had ever received. The remaining money needed for the trip to go get the prisoners was raised by donations from local churches.

Though Crossley’s ad infuriated Romanian Embassy staff, it was a diplomatic success. The prisoners were all released.

Two of those released were sisters, young women who were imprisoned and tortured for being part of a Bible-smuggling ring. Their youngest sister had avoided prison because she was too young. “They were caught loading Bibles at a secret drop-off, where [the books] were buried in the ground—it was a whole complex operation,” said Alfaro.

The three sisters came to the United States and eventually moved to Pennsylvania, where they started working for Crossley at Tohickon, making glass eyes. That was 31 years ago, and the three still work at Tohickon today.

While I was there, they were painting and dabbing the irises of glass deer eyes. I was gently told they didn’t want to discuss what had happened to them, but they were very warm, cracking jokes as they worked. The three still live together, in a house near the factory.

Crossley died in 2011. His daughter Jessie, meanwhile, has vivid memories of Romania, where she was hailed as “the world’s littlest smuggler,” after her parents smuggled smaller items in her diapers, and later, pants legs.

A pretty woman with soft brown eyes, she laughs when she thinks back on it, though I gather it was not an idyllic childhood in many ways. Today, she runs a homeless shelter that she started in Bucks County, after she realized that many people in the area were sleeping in their cars, and even under bridges, as the recession hit.

With the field of taxonomy growing all over the world, the business has changed completely since the 1980s, Alvaro explained. “There’s a stereotype that is being overcome, of backwards people. In fact, the field is full of artists, more and more women, animal rights activists, all kinds. It’s actually, contrary to stereotype, people who love nature and want to preserve it.”

When the “rarest creature in the world,” the Pinta Island giant tortoise Lonesome George, died, Tohickon made the eyes for the tortoise’s recreation, which was exhibited all over the world.

The company also created the eyes for a Bigfoot model made by world champion taxidermist Ken Walker, who is so obsessed with Bigfoot that he was the subject of a documentary called “Big Fur.”

When asked to name the strangest pair of eyes he’d ever made, Alfaro said, “probably the coelacanth fish,” because it was impossible to detect what color its eyes actually were. It’s considered a “living fossil” and was thought to have gone extinct 65 million years ago, until it was found by a South African fishing boat.

His designs have also veered into fictional universes. “I’ve got Sith Lord eyes down to a T,” Alfaro said.

“And I love doing dinosaur eyes. Who is going to prove you wrong?”

Based in New York, Celia Farber has written for The Epoch Times, Harper’s Bazaar, Rolling Stone, Esquire, Salon, The New York Observer, The New York Post, Media Post, and many more. She was winner of the 2008 Semmelweis Society International’s Clean Hands Award for Investigative Journalism.