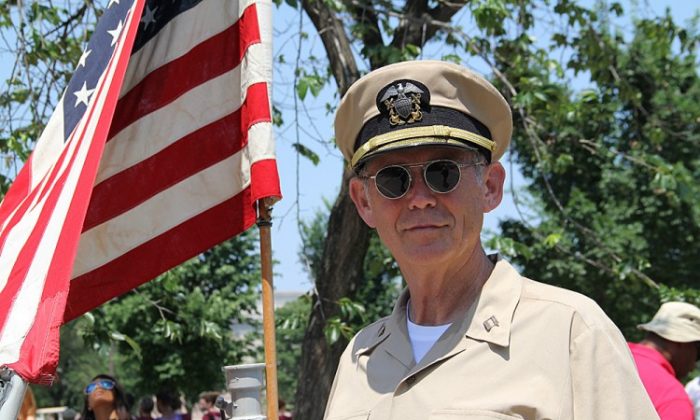 Richard Baldwin, a retired naval officer, was keen to talk about his father who is veteran of World War II, on Memorial Day. (Shar Adams/Epoch Times Staff)
US

Washington, D.C.—It’s a pageant, the Memorial Day Parade in Washington, D.C. The military bands sport plumes, braid and brass sections blasting, and drums rat-a-tat-tatting, challenging all to ignore them. The streets around Constitution Avenue are clogged with military paraphernalia, hummers and jeeps, amphibious vehicles and helicopters, and most of all servicemen from all the forces and all the battles, from the Civil War to the modern military. But they are all there and they line up for something more serious, to pay their respects to those who made the ultimate sacrifice.

“It’s all about honoring the memory of the veterans who came before us and fought for our freedom and liberty, keeping the country together as one,” Jeffrey French, a plant program manager on Andrews Air Force Base, said from under his American Civil War regalia.

French said he felt “proud and honored” to be able to march in the parade. Memorial Day was a significant day, he said, providing an opportunity to remind people not only of the sacrifices those early soldiers made during the Civil War, but also of those who continue to lay their lives on the line for the United States.

“A lot of people since the Revolutionary War have sacrificed and shed their blood for us to have freedom and liberty,” French told The Epoch Times, “This is the least we can do to honor them.”

Richard Baldwin is a retired naval officer, but it was his father whom he was keen to talk about on Memorial Day.

A veteran of World War II, his father had been in a combat force in the Philippines when the Japanese surrendered and was in Tokyo Bay September 1945, when the Japanese signed the ‘Instrument of Surrender’ aboard the USS Missouri.

An American farm boy who, within a couple of months, had gone from working the fields with mules and lighting the nights with kerosene lamps, to becoming part of the U.S. combat force in the Western Pacific, his father had never spoken with Baldwin about his war years, despite their shared military background. That is, until last year.

“He is very relaxed about it—there is no trauma there, but he doesn’t elaborate very far from the question,” Baldwin said, adding that it is only since he has been doing his own research as part of a heritage project that he has found the right questions to ask his father.

Now Baldwin says he has to keep the questions coming, as he realizes the time is precious. His father is 84 years old.

Sitting high on a red-white-and-blue float were distinguished U.S. Air Force pilots from the Korean War. Long known as the “Forgotten War,” Korean War veterans had returned from their war service to a largely disinterested public.

“It means a heck of a lot to us veterans of the Korean War that the Department of Defense and the country have seen fit to continue to recognize what we put forth in that war,” said Lt. Gen. Charles Cleveland.

“Some people call it the ‘Forgotten War’ and I like every effort to make sure that is not true,” he said.

“It was a time after World War II, when the Marshall spirit had kind of gone away, and the armed forces had disbanded to a great degree,” he explained, “A lot of us felt our efforts were not fully appreciated, so it is so nice to know that, 50–60 years after the fact, that we are being appreciated.”

Ironically, the Korean War was particularly significant for the U.S. Air Force, as it was the first war in which the air forces fought as a separate service.

“We didn’t win that war ourselves, the Air Force, but we kept the army and marines from losing it,” he said.

There are not many left, but representatives of the Tuskegee Airmen, the first African-American military aviators in the U.S. armed forces, were there. Ninety-three-year-old Cicero Satterfield a groundsman for the Tuskegee Airmen, said he was just happy to be still alive.

“I appreciate being here,” he told The Epoch Times as he sat proudly in his jeep, “Many of us have died. “

Satterfield entertained a continual stream of well-wishers, some of whom just thanked him for his service while others were armed with books about the famous airmen for him to sign.

For Gold Star families, Memorial Day does not have the same joy. Seated on a special float among other Gold Star ladies, Leslie Spencer holds up a poster of the son she lost in the Iraq War.

“His last words to me were ‘Mum, I never want to be forgotten,'” she said, adding: “All soldiers should never, ever be forgotten and Memorial Day should be in their memory.”

Spencer said she was displaying the photo of her son so that everyone “could see who Raymond Spencer was, and remember him.”

“You see the numbers come up, you know so-and-so was killed in Iraq, but it is not the same thing,” she said, “So here is a picture of who he really was.”

On the Gold Star float was Vivianne Wersel, president of the Arlington Chapter of Gold Star Wives.

None of the Gold Star wives took Memorial Day for granted, as it presented yet another opportunity to honor their spouses and to bring the ‘sisterhood’ and ‘brotherhood’ (“We have widowers now, too”) together, but Memorial Day “is a tough day,” she said.

“A day doesn’t day go by that I don’t think about my husband, Rich, so it is a bittersweet day,” she said. “It is great to see the community recognize them, but at the same time, it hurts.”