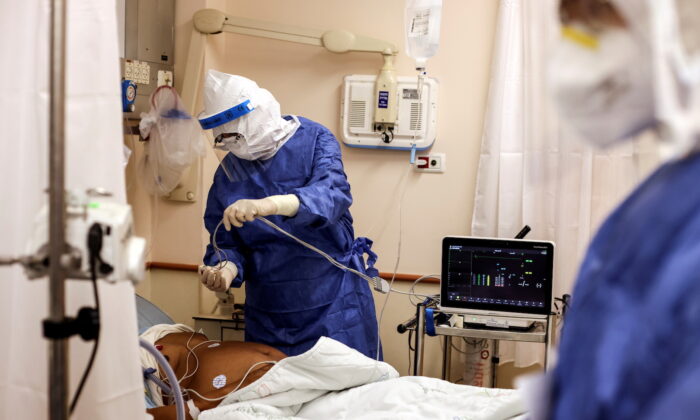 A medical staff member attends a patient suffering from COVID-19 in a ward at Beilinson Hospital in Petah Tikva, Israel, on Aug. 18, 2021. (Ammar Awad/File Photo via Reuters)
Vaccines & Safety

In Israel’s COVID-19 wards, nearly 60 percent of the country’s 514 patients who are currently hospitalized with severe or critical CCP (Chinese Communist Party) virus symptoms are fully vaccinated, according to an Aug. 16 report.

The figures were reported as doctors are continually learning which vaccinated patients are most vulnerable to severe illness, amid growing concerns about instances of the COVID-19 vaccines providing less protection against the worst forms of the disease.

“There are so many breakthrough infections that they dominate, and most of the hospitalized patients are actually vaccinated,” said Uri Shalit, a bioinformatician at the Israel Institute of Technology, Science reported.

For the majority of patients experiencing breakthrough infections, about 87 percent were 60 or older and received two vaccine doses at least five months ago. The findings show that “breakthrough cases” are not a rare event as the term implies.

Noa Eliakim-Raz, the head of the COVID-19 ward at Rabin Medical Centre in Petah Tikva, said the majority of hospitalized vaccinated patients are older, unhealthy, in some cases immobile, and already required nursing care prior to infection.

Israel is among the world’s highest vaccination levels, with some 5.4 million people—or 78 percent of those 12 and older—fully vaccinated. The vast majority received the Pfizer shot. The country is, however, showing one of the highest infection rates in the world, potentially a sign of waning vaccine immunity as the Delta variant now accounts for the largest portion of all COVID-19 infections in the country.

New cases in Israel have seen a steady rise since mid-July, with health officials saying the majority is reported in unvaccinated children, noting that unvaccinated people are still more likely to end up in the hospital or die.

Dr. Rochelle Walensky, the head of the U.S. Centers for Disease Control and Prevention (CDC), said during a news briefing on Aug. 18, three recent studies show that COVID-19 vaccines’ efficacy decreases over time in preventing infection. Although protection against death and hospitalization is “holding up well,” the vaccines’ effectiveness is “waning” in even preventing severe illness or death.

“Even though our vaccines are currently working well to prevent hospitalizations, we are seeing concerning evidence of waning vaccine effectiveness over time and against the Delta variant,” Walensky said.

Considering the number of Israelis who are fully vaccinated and the spread of the Delta variant, breakthrough cases were inevitable, though it now has become central to a global debate over whether highly vaccinated countries should give booster doses of COVID-19 vaccines, and to which people.

Israel began offering booster doses to people age 60 and older in July and has since expanded that eligibility. Other countries, including France and Germany, have so far limited their booster plans to the elderly and people with weak immune systems.

U.S. officials said their booster plan is based on concern that over time the vaccines will provide less protection against severe disease, including among younger adults. Booster doses will become available to all Americans beginning in September.

“We are watching other countries carefully and [are] concerned that we too will see what Israel is seeing, which is worsening infections over time among vaccinated people,” Walensky said during the Aug. 18 briefing, explaining why federal officials are now recommending that booster shots be given to Americans eight months after they’ve been vaccinated with the Pfizer or Moderna shots.