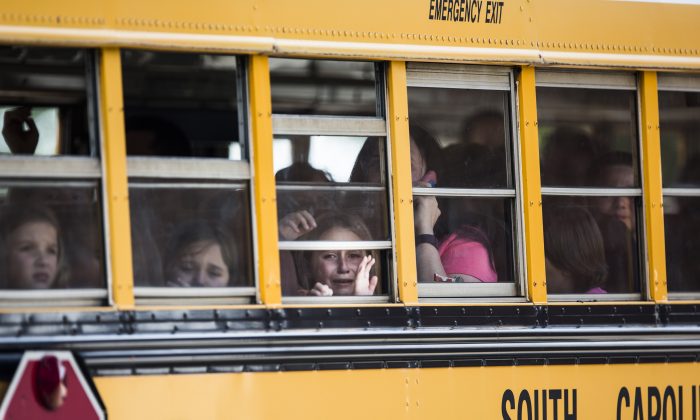 A Townville Elementary student looks out of the window of a school bus as she and her classmates are transported to Oakdale Baptist Church, following a shooting at Townville Elementary in Townville Wednesday, Sept. 28, 2016. A teenager killed his father at his home Wednesday before going to the nearby elementary school and opening fire with a handgun, wounding two students and a teacher, authorities said. (Katie McLean/The Independent-Mail via AP)
US

More Than Another Call: Chief Talks About School Shooting in SC

TOWNVILLE, S.C.—When two firefighters rolled up to an elementary school shooting, they said they found only a wrecked black pickup truck at the playground. There was no gunman, and no one inside the truck.

Within minutes, though, they performed actions that led to them being hailed as heroes: One went inside to help treat the wounded and the other searched for the shooter.

“This was more than just another call to us. This incident occurred in the school where our children and the children of the community attend,” Townville Fire Chief Billy McAdams said Thursday during a news conference, pausing to collect himself as he recalled the harrowing events of the day before.

Authorities say the teen shot his father at their home before driving the pickup a couple of miles to Townville Elementary School and shooting at a door as it was opened for recess. Bullets struck two students and a teacher and the school was immediately placed on lock down.

One of the wounded, 6-year-old Jacob Hall, remained in critical condition Thursday and was said to be fighting for his life. A teacher who was shot in the shoulder and another student who was hit in the foot were treated and released from a hospital.

The shooter never made it inside the building, and no one else was hurt, Anderson County District 4 Superintendent Joanne Avery said.

Authorities said they don’t yet know a motive for the shooting and they were not sure if the students and teacher were targeted or shot randomly. The sheriff said the teen had been homeschooled.

The fire chief said he and firefighter Jamie Brock were working on his farm when they got the call about an active shooter at Townville Elementary. They rushed to the school and found the empty pickup.

Teachers told them there were wounded inside, and Brock suggested to the fire chief that he go inside to help because he was a paramedic. Alongside a school nurse, the chief attended to Jacob, who was the most seriously injured.

In the meantime, law enforcement swarmed the school and Brock looked for the shooter, finding him near the back of the school building.

“Feeling it was imperative to the safety of the students, the teachers and all the responders that were on site, he immediately confronted and subdued that shooter,” the chief said. “He was able to keep him on the ground until law enforcement could place him into custody.”

Authorities have not released the teen’s name or specific age.

Anderson County Coroner Greg Shore said the teen, crying and upset, called his grandmother’s cellphone at 1:44 p.m. Wednesday. The grandparents couldn’t understand what was going on, so they went to his home just 100 yards away. When they got there, they found 47-year-old Jeffrey Osborne dead and their grandson gone.

About one minute later, authorities received a 911 call from a teacher at the school of about 300 pre-kindergarten to sixth-graders.

The teen’s mother, Tiffney Osborne, said in a statement that the family “cannot express the devastation we feel at the loss of our beloved Jeff.” She was at work at the time of the shooting, Anderson County Sheriff John Skipper said.

Both Tiffney and Jeffrey Osborne’s first marriages ended in divorce before they got married. They each had children, who are now adults, with their exes.

Authorities said audio from the 911 calls will not be released while the investigation is ongoing.

In a statement read by the fire chief, Brock said he doesn’t want attention for his actions.

“The true heroes of yesterday’s senseless tragedy are the teachers who put their lives on the line to protect the students and the principal, through fears of her own, did what was right to ensure the safety of those students,” he said. “They deserve to be called the heroes, and I tip my hat to them.”