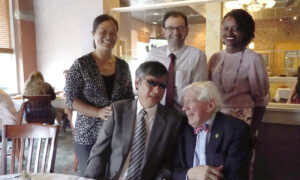 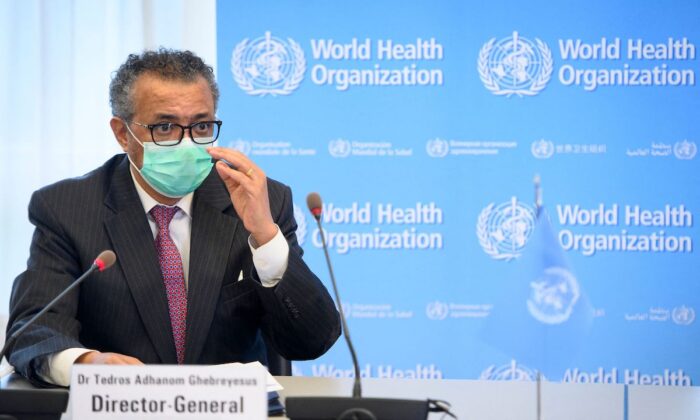 Chief of the World Health Organization (WHO) Tedros Adhanom Ghebreyesus during a meeting at the WHO headquarters in Geneva on May 24, 2021. (Laurent Gillieron/AFP via Getty Images)
cover-up

More Than a Year After Declaring Pandemic, WHO Calls for ‘Audits’ of Wuhan Labs

The World Health Organization (WHO) on Friday called for an audit of laboratories in Wuhan, China, as part of a second phase of investigations into the origins of COVID-19 after the first phase failed to secure transparency and information sharing from the Chinese regime.

A key priority to moving toward a deeper investigation into the origins of COVID-19 will include “audits of relevant laboratories and research institutions operating in the area of the initial human cases identified in December 2019,” WHO chief Director-General Tedros Adhanom Ghebreyesus said during a closed-door meeting.

The second phase of the probe will also require studies of certain Wuhan residential areas and the central city’s wildlife and animal markets, including the Huanan seafood market, Tedros said, according to remarks provided by the WHO.

Investigators will focus on “studies prioritizing geographic areas with the earliest indication of circulation of SARS CoV-2,” Tedros said.

A day earlier, the agency chief said it was “premature” to rule out the possibility that COVID-19 could have emerged from a Wuhan lab without sufficient evidence, walking back on a controversial WHO report published in March that designated a lab leak theory hypothesis as “extremely unlikely.”

In recent months, the theory that the CCP (Chinese Communist Party) virus was the result of a leak from the Wuhan Institute of Virology (WIV) has gained wider recognition as a likely possibility after being largely condemned by legacy media, with commentators calling it a “debunked conspiracy” despite a number of scientists and officials presenting evidence to support the hypothesis. Confusion was exacerbated by comments by Dr. Anthony Fauci, director of the U.S. National Institute of Allergy and Infectious Diseases (NIAID), who had agreed with the CCP’s assessment about the virus origin.

U.S. President Joe Biden on May 26 ordered the intelligence community to produce a report in 90 days on the origins of the virus, saying that agencies are looking at different theories, including the possibility of a laboratory accident.

The WHO also said on Thursday that it will fix several “unintended errors” in its joint report with China on the origins of the virus, and that it will “clarify that the first family cluster was not linked to the Huanan seafood market,” the Washington Post first reported.

China remains a member state of the WHO.

The agency’s report, produced with the input of Chinese scientists who would have been working under Beijing’s restrictions, was questioned by U.S. government officials and some scientists who voiced concerns about the communist regime’s influence over the probe. The critics noted that China had denied scientists access to raw data from early patients.

The initial report did adhere to Beijing’s preferred stances on the virus’s origin. Beijing has pushed a natural zoonotic hypothesis—that the virus was transmitted to humans from an animal host—as the most likely origin. The Chinese regime has repeatedly cited the WHO’s assessment that a lab leak was “extremely unlikely” as its reasoning for pushing virus probes in other countries.

Tedros on Friday said that the WHO expects China to “support this next phase of the scientific process by sharing all relevant data in a spirit of transparency.”

He also announced the creation of a new permanent International Scientific Advisory Group for Origins of Novel Pathogens (SAGO) that will “play a vital role in the next phase” of the CCP virus origins probe, “as well as the origins of future new pathogens.”

Tedros said an open call will be made by the WHO for “highly qualified experts” to apply to SAGO. Different investigators will be nominated by member states, he said.

“Members of this new advisory group will be selected based on their technical expertise, taking into account geographical representation and gender balance.

“The world needs a more stable and predictable framework for studying the origins of new pathogens with epidemic or pandemic potential,” Tedros added.

That announcement has been met with concern from some scientists who have questioned whether the proposal could see SAGO replace the existing mission appointed by the WHO to investigate the origins of the virus.

Gerald Keusch, associate director of the National Emerging Infectious Diseases Laboratory Institute at Boston University said that he’s “suspicious” about the creation of the new group.

“I’m very suspicious about dismissing the initial task force and now allowing individuals and governments to nominate themselves, which will result in a partisan, selective process and not lead to the best composition,” Keusch told ScienceMag.

The WHO didn’t immediately respond to a request for comment by The Epoch Times.