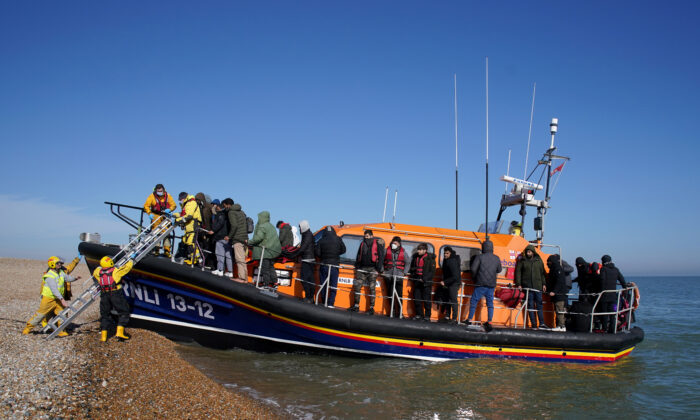 A group of people brought ashore by the RNLI following a small boat incident in the English Channel are brought to Dungeness, Kent, England, on March 15, 2022. (Gareth Fuller/PA)
UK

More than 900 people have been intercepted in small boats crossing the English Channel in what is thought to be the largest number of migrants attempting to reach the UK in a single day so far this year.

The UK authorities intercepted 405 people in 12 boats on Tuesday, while the French stopped another 538 people in 11 boats.

Among those to arrive were several children, including a baby, who were brought to shore by the Royal National Lifeboat Institution at Dungeness, Kent.

A Home Office spokeswoman said joint operations with the French had “prevented more than 23,000 migrant attempts” in 2021 and 19 small boat organised criminal groups had been dismantled with 400 arrests since July 2020.

“Not only are they an overt abuse of our immigration laws but they also impact on the UK taxpayer, risk lives and our ability to help refugees come to the UK via safe and legal routes. Rightly, the British public has had enough.

“Through our Nationality and Borders Bill, we’re cracking down on people smugglers and fixing the broken system by making it a criminal offence to knowingly arrive in the UK illegally and introducing a maximum sentence of life imprisonment for those who facilitate illegal entry into the country.

“Our targeted work with French authorities led to over 500 people (being) intercepted before attempting this treacherous journey to reach the UK.”