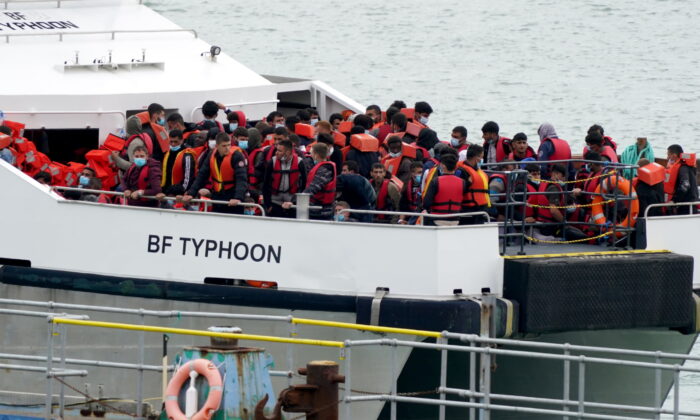 A group of people thought to be illegal immigrants are brought in to Ramsgate, Kent, England on Aug. 1, 2022. (Gareth Fuller/PA Media)
UK

More Than 20,000 Illegal Immigrants Have Crossed English Channel to Reach UK This Year

More than 20,000 illegal immigrants have been detected crossing the English Channel in small boats to reach the UK since the beginning of 2022, UK government figures show.

There have been 3,618 crossings detected in August so far, with 1,694 in the past week, according to the Ministry of Defence (MoD).

Last month, two reports criticised the Home Office over its “ineffective” response to the challenge. One said the Border Force’s approach to preventing the journeys was “ineffective and possibly counter-productive,” while the other said the initial processing of those who arrived has been “ineffective and inefficient.”

In one of the reports, former Australian Foreign Minister Alexander Downer said the Border Force Maritime command has been “ill-equipped” to deal with a challenge that is “all-consuming.”

Since small boats carrying migrants are flimsy and overloaded, they are all considered “vessels in distress.”

As a result, the Border Force has been “effectively rescuing people and then escorting them into port and enabling them to enter the UK,” Downer said. “It is unsurprising that there is some public disquiet about this issue.”

To deter illegal immigrants, Downer said the UK government should keep “all legal and operationally feasible options,” including turning boats around “when it is safe and legal to do so” using “contracted vessels and specialist crews.”

He also recommended the UK quickly move illegal arrivals to a third country for processing, and reach an agreement with France in order to return small boat arrivals.

Since the UK’s exit from the European Union, the Dublin Regulation, which enables EU countries to return illegal immigrants to the first EU country they arrived in, no longer applies to the UK. As a result, few illegal immigrants were successfully returned. An effort to sign a new bilateral deal with France has so far been unsuccessful.