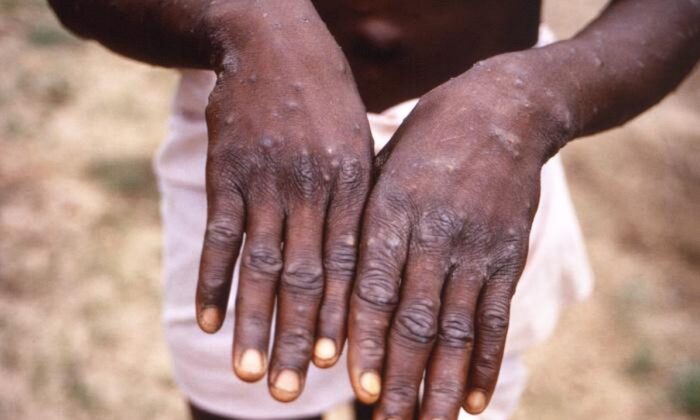 A photo of an individual suffering from monkeypox during a CDC investigation into an outbreak of monkeypox in the Democratic Republic of the Congo in 1997. (Brian W.J. Mahy/CDC)

More Than 200 People in 27 States Now Being Monitored for Monkeypox: CDC

The Centers for Disease Control and Prevention (CDC) is now monitoring more than 200 people in 27 U.S. states for potentially being exposed to monkeypox after their contacts were traced to a Texas resident who contracted the rare illness while traveling in West Africa several weeks ago.

Late last week, the Dallas County Health and Human Services confirmed the Texas case, saying it’s the first-ever time the monkeypox virus has been seen in the Lone Star State. The virus was discovered in a Dallas resident who went to Nigeria and arrived at Love Field Airport on July 9, officials said, adding that the unnamed individual is hospitalized in stable condition.

Now, the CDC’s National Center for Emerging and Zoonotic Infectious Diseases is working to follow up with more than 200 people in 27 states, said Andrea McCollum, who leads the poxvirus epidemiology unit within the agency, according to medical news website Stat News.

“It is a lot of people,” McCollum said in confirming the numbers. So far, no additional monkeypox cases have been detected within the United States.

Individuals who are being monitored include people who sat within six feet of the infected Texas resident who traveled from Lagos, Nigeria, to Atlanta, Georgia, several weeks ago. Others who are being monitored by the CDC include family members, people who used a bathroom on the plane, airline workers who cleaned the plane, and flight attendants, McCollum told the site.

“We define indirect contact as being within 6 feet of the patient in the absence of an N-95 or any filtering respirator for greater than or equal to three hours,” she said.

Monkeypox, considered a rare virus among people, is related to smallpox—which has affected people for thousands of years and is believed to have wiped out entire civilizations including the Aztecs in the 16th century. CDC officials say that monkeypox, however, causes less severe illness than smallpox.

The virus starts with influenza-like symptoms and swelling of the lymph nodes before turning into a rash on the face and body, according to the CDC. People may become infected with the rare illness have come into contact with an infected animal or potentially animal products, the agency notes.

There was a monkeypox outbreak in the United States in 2003 when a shipment from Ghana contained several rodents and other small mammals that were infected.

Several days ago, when the virus was detected, Dallas County Health and Human Services chief Dr. Philip Huang said officials “have determined that there is very little risk to the general public.”

The Epoch Times has contacted the CDC for additional comment.