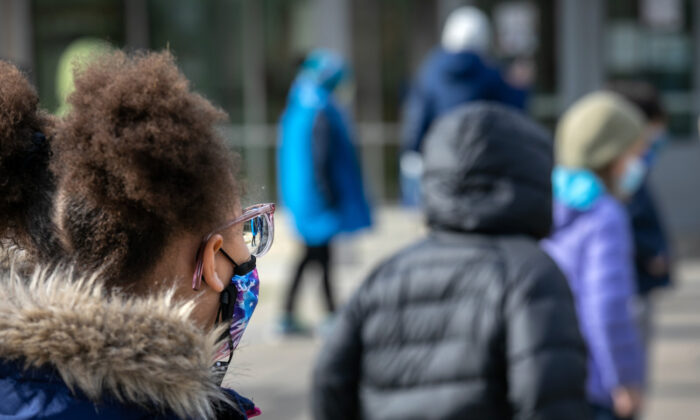 A child wears a mask at Rogers International School in Stamford, Connecticut, on Nov. 19, 2020. (John Moore/Getty Images)
US News

More than 150 children in California have been diagnosed with a rare, potentially life-threatening syndrome associated with the CCP virus since the outbreak first began in March.

As of Dec. 14, least 152 children in the state have been diagnosed with the condition, officially called “Pediatric Multi-System Inflammatory Syndrome Potentially Associated with COVID-19,” or MIS-C, according to California’s Department of Public Health.

In the week between Dec. 7 and Dec. 14, seven new MIS-C diagnoses were recorded in the state.

Earlier this month, a child in Los Angeles County died from complications linked to the COVID-19-linked multi-system inflammatory syndrome, marking the first such death in the county.

The condition is similar to Kawasaki disease (KD), also known as Kawasaki syndrome, according to doctors. The U.S. Centers for Disease Control and Prevention (CDC) describes KD as an acute febrile illness of unknown cause that primarily affects children aged 5 and younger.

MIS-C meanwhile causes symptoms such as a persistent fever of at least 100.4 degrees, hypotension, multiorgan involvement, rashes, swollen glands, and elevated inflammatory markers, the CDC said in a May advisory.

Most cases recorded are in young children who had been exposed to COVID-19, the disease caused by the CCP (Chinese Communist Party) virus, commonly known as the novel coronavirus.

The CDC defines the rare condition as occurring in people aged 21 and younger, with symptoms such as fever, evidence of inflammation, illness severe enough to require hospitalization, and impairment of multiple organs such as the heart, kidneys, blood vessels, gut, skin, and nerves.

The state health department urged parents in a Dec. 14 release to contact a doctor immediately if their child presents the listed symptoms.

Nationwide, a total of 1,288 people—mostly children and adolescents—have been diagnosed with the syndrome, and 23 have died, according to the CDC. More than 75 percent of reported cases have occurred in children who are Hispanic or Latino (460 cases) or Black, Non-Hispanic (410 cases).

The CDC said that the majority of children developed the syndrome two to four weeks after testing positive for COVID-19, with slightly more than half (56 percent) of reported cases being male.

“There are kids that are not sick enough to be admitted. Then there are children that go directly into shock with multi-organ failure,” Dr. Jane Burns, a professor and director of the Kawasaki Disease Research Center at UC San Diego told the Los Angeles Times. “We don’t understand why the heart muscles basically pump poorly in these children, but that can be reversed very quickly with the right cocktail of inflammatory treatment. They can go from death’s doorstep in one day.”

“Healthcare providers who have cared or are caring for patients younger than 21 years of age meeting MIS-C criteria should report suspected cases to their local, state, or territorial health department,” the CDC advisory said.

To meet the criteria, doctors should rule out other plausible diagnoses. Children with the condition should also test positive for current infection with the CCP virus or for antibodies demonstrating a recent infection.