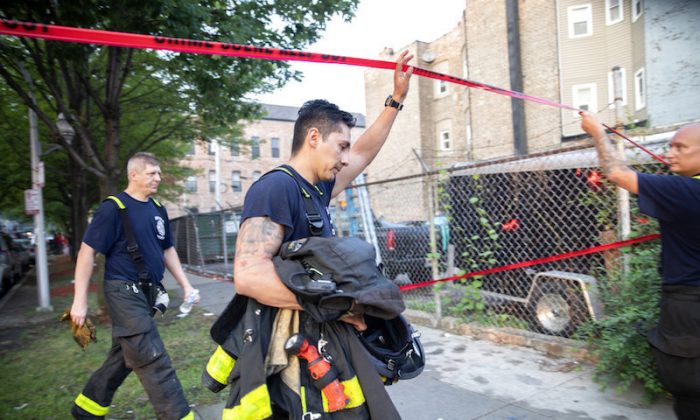 Chicago firefighters walk under tape at the scene of a fire that killed at least 8 people, including 6 children, in the 2200 block of South Sacramento Ave. on Aug. 26, 2018, in the Little Village neighborhood of Chicago. (Erin Hooley/Chicago Tribune)
Illinois

More than 130 Chicago city workers, consisting of firefighters, health care workers, and other first responders, filed a lawsuit against the city’s COVID-19 vaccine mandate, arguing the order is unconstitutional.

The lawsuit was filed in Chicago’s federal court, pushing back against Illinois Gov. J.B. Pritzker’s mandate that health care workers and other state employees must be fully vaccinated against COVID-19.

The legal move also contrasts the order by Chicago Mayor Lori Lightfoot that required all city workers to report their vaccination status earlier in October. The lawsuit claimed the state and city mandates are government overreach and are, as a result, “null and void.”

The city worker deadline to provide proof of COVID-19 vaccination status was Oct. 15. Lightfoot said the policy is “about ensuring a safe workplace, but fundamentally, it’s about saving lives.”

The mayor also thanked city workers who met the deadline. In a post on Oct. 18 on Twitter, Lightfoot announced 79 percent of city workers had confirmed their vaccination status, while 84 percent of those reporting were fully vaccinated.

The lawyer representing the city workers has petitioned the court for a temporary restraining order that would block enforcement of the mandates to keep workers from being suspended or fired while the pending legal matter continues.

The legal action comes as 21 officers with the Chicago Police Department have been placed on leave without pay for refusing to disclose their COVID-19 vaccination status, as required by a city mandate, according to an official.

Chicago Police Superintendent David O. Brown confirmed the figure during a press conference on Tuesday, a day after Lightfoot said that a “very small number” of officers had been put on no-pay status for refusing to comply with the mandate after being given several opportunities to do so.

Brown told reporters that 67.7 percent of the department’s 12,770 employees had so far complied with a city requirement to report their COVID-19 vaccination status. The department has the lowest compliance rate with the city’s mandate of any city department, the Chicago Sun Times reported.

“This process has been obviously very emotional,” Brown said on Tuesday. “We have given them the time and given them the explanation as best we can on the serious nature of violating the vaccine mandate.”

Brown said that the 21 officers still have the option to disclose their COVID-19 vaccination status.