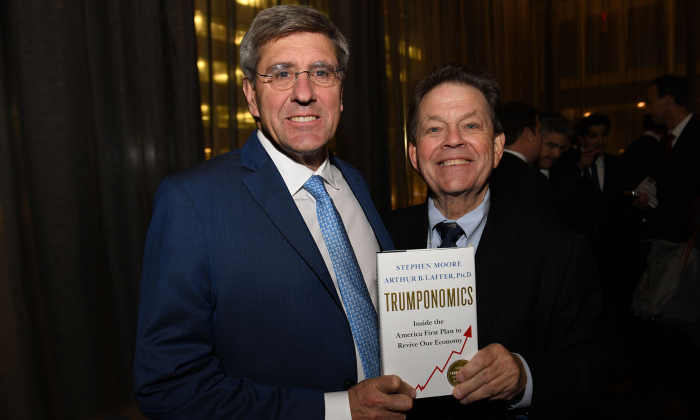 A group of 105 economists, analysts, and prominent conservatives endorsed President Donald Trump’s nomination of Stephen Moore for the board for the Federal Reserve on April 15.

The 12-page letter is signed by the likes of Steve Forbes, the editor-in-chief of Forbes magazine, Bill Ford, the former president and CEO of the Atlanta Federal Reserve, and Dale Osborne, the emeritus professor of economics and finance at the University of Texas at Dallas.

“We, the undersigned, support Steve Moore’s nomination to the Board of Governors of the Federal Reserve,” the letter stated.

Trump announced his intention to nominate Moore in a Twitter message on March 22. The president has not yet officially submitted the nomination to the Senate.

“Thank you [Trump] for the opportunity to serve & for your zealous commitment to freeing the American economic engine from government overreach & oppressive taxation!” Moore responded at the time.

Moore has faced intense criticism from liberals over his advocacy for Trump’s economic agenda. Moore authored a book with economist Arthur Laffer lauding Trump’s plan to revive the United States’ economy. Laffer was among the 105 signatories in the letter of support.

Two seats are vacant on the board of the Federal Reserve. Trump said he intends to nominate Herman Cain, a businessman, to fill the second seat. Unlike the three other members who Trump appointed to the board, Cain and Moore are vocal critics of the Federal Reserve’s fiat currency and fractional reserve banking system.

“There’s no bigger swamp in Washington than the Federal Reserve Board,” Moore told The Hill in February. “It’s filled with hundreds of economists who are worthless, who have the wrong model in their mind. They should all be fired and they should be replaced by good economists.”

Cain also is reportedly facing an uphill battle if Trump goes through with the nomination. Four Republican senators said they oppose Cain’s nomination, setting up for a potentially razor-thin confirmation vote.

The Senate must confirm any nominees, and Republicans control the chamber with 53 seats. If the four Republicans don’t change their minds, Cain would need the support of one Democrats to reach the 50 votes needed for confirmation.

White House economic adviser Larry Kudlow told reporters on April 16 that the president is standing by his nominees.

Kudlow said the White House is vetting additional candidates as Cain and Moore go through the process.

Congress tasked the Federal Reserve with keeping inflation at a healthy level and preventing economic bubbles. Over the course of its existence, the central bank has instead contributed to the booms and busts it was created to prevent.