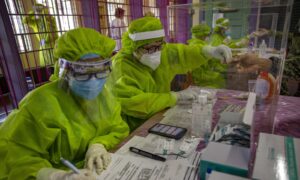 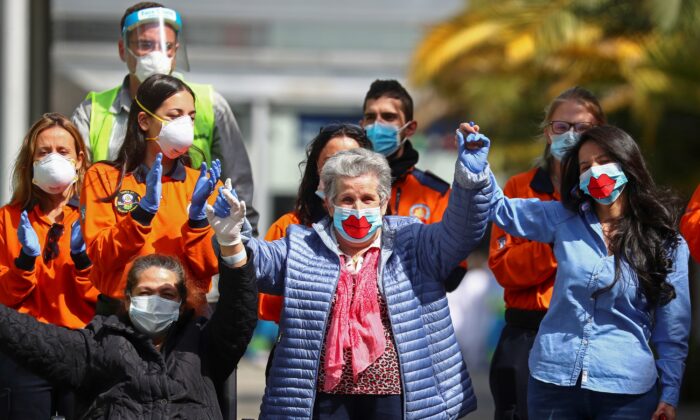 The final patients, Maria, Patrocina, and Miriam react after being discharged from a temporary hospital set up at IFEMA fairgrounds, before it's closure, amid the CCP virus outbreak in Madrid, Spain on May 1, 2020. (Sergio Perez/Reuters)
PUBLIC HEALTH INFORMATION

Over one million people around the world have recovered from the CCP virus, including over 100,000 in the United States, Germany, and Spain.

As of 10:51 a.m. Eastern Time, 1,024,529 people infected with the CCP (Chinese Communist Party) virus, a novel coronavirus from China that causes the COVID-19 disease, have recovered, according to Johns Hopkins University, which is tracking worldwide infections, recoveries, and other measures.

The figures come from health departments and other sources.

The most recoveries have been recorded in the United States, where 153,947 patients have recovered.

Recoveries in China and Iran are around 78,000. The Chinese Communist Party has consistently under-reported the true number of infections, making the number of recoveries suspect. A similar situation has unfolded in Iran.

The CCP virus primarily causes severe illness in the elderly and those with underlying health conditions. It kills a small percentage of patients.

The vast majority of people who become infected recover, most outside of hospitals.

Symptoms include fever, cough, shortness of breath, and chills.

A significant percentage of people who get sick with the virus show no symptoms, a key driver in the increase in antibody tests.

The tests show whether a person was infected in the past. They are believed by some experts to show immunity to the virus, though that hasn’t been confirmed.

There were over three million confirmed CCP virus infections worldwide, including over one million in America, as of Friday. The United States has done by far the most testing in the world.

Over 233,000 people have died with COVID-19, including tens of thousands of deaths in Italy, the United Kingdom, Spain, France, and the United States.