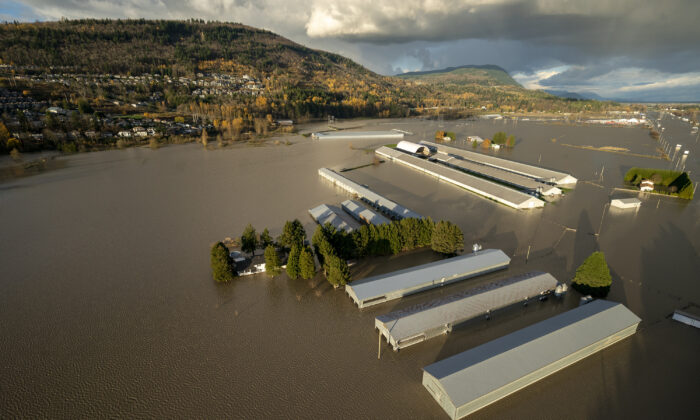 More Storms and Downpours to Hit BC: Province Warns Residents to Get Prepared

British Columbians are being warned to brace themselves for more “heavy rain, strong winds, and freezing temperatures” that will hit the province’s north and south coasts over the weekend, lasting until Tuesday, Nov. 23.

“Environment Canada has issued a new winter storm advisory for the north coast, and we’re expecting heavy precipitation and wind. The storm is forecast to move south; starting Sunday, rain will reach heavily impacted areas in the Fraser Valley,” said the B.C. government on Twitter on Saturday.

Areas hit by winter storms include the inland sections of the North Coast, the McGregor region, and Pine Pass on Highway 97, Environment Canada warned on Sunday.

Special weather statements were also issued for Haida Gwaii and coastal sections of the North Coast and Central Coast as heavy rains associated with an atmospheric river engulfed the areas. An atmospheric river is a long, narrow band in the atmosphere that carries water vapour, like a river in the sky, often releasing this vapour as rain or snow when the river makes landfall.

“Flooding could result from the heavy rain. Landslides could occur,” the statement added.

B.C. Public Safety Minister Mike Farnworth says the government is keeping a close eye on areas that are dealing with flooding.

“I urge people to pay close attention to weather warnings given the unpredictability that comes with climate change,” Farnworth said at a briefing Saturday.

He also urged residents to comply with the travel restrictions implemented on Friday, Nov. 19, that restrict non-essential travel along “severely affected highways” damaged by the flooding and mudslides.

“If you can avoid travel, work from home, or take public transit for the next 10 days, you will help ensure that we have the fuel and access and means to keep responding as we need to … to make sure emergency vehicles and essential vehicles can do their jobs,” he said at the briefing.

The new measures will prioritize gas and diesel for “essential vehicles” to “keep people safe and re-establish the movement of critical goods and services,” said the province in a press release on Nov. 19. Vehicles deemed as essential include emergency service vehicles, grocery delivery trucks, and military vehicles.

The province additionally announced on Saturday that Highway 99 is now open for people travelling for essential purposes only, connecting the Lower Mainland to Pemberton, Lillooet, and the Interior.

A route to the southern interior of B.C. was also opened on Friday that allows goods movement and essential travel, using Highway 3 and Highway 7.

Meanwhile, Abbotsford Mayor Henry Braun announced on Friday that floodgates at the Barrowtown pump station have been partially opened, allowing water levels in the Sumas Prairie region to drop.

The B.C. Coroners Service updated on Saturday that the bodies of four people have been recovered from the mudslide since Nov. 15.

“Efforts continued Friday, Nov. 19, to locate a fifth person reported as missing, but unfortunately those attempts were unsuccessful,” Lisa Lapointe, B.C.’s chief coroner, said in a statement on Saturday.