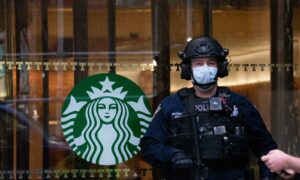 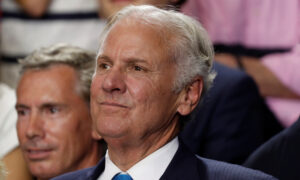 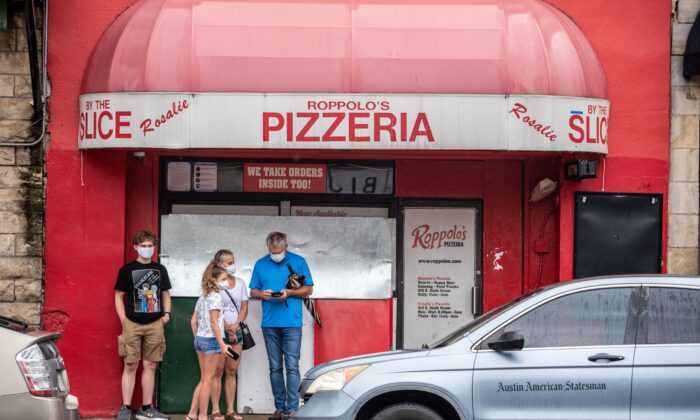 A family wearing facemasks stands in front of a pizzeria in Austin, Texas, on June 26, 2020. (Sergio Flores/AFP via Getty Images)
CCP Virus

West Virginia, Texas, Kansas, and parts of South Carolina recently enacted mask mandates, joining the 23 states that have implemented orders that make it mandatory to wear face coverings in public.

New Jersey will follow suit soon with an executive order, Governor Phil Murphy said on July 8. “Face coverings are now required in outdoor public spaces when social distancing is not practicable,” Murphy said in a message on Twitter. The state had already made it mandatory to wear masks in indoor public places since April.

Requiring masks outdoors is a step I had hoped we would not have to take. By and large, New Jerseyans have been outstanding in their compliance

But, unfortunately, we’ve been seeing a backslide in compliance in New Jersey and across our nation.

While the other states have some form of mask recommendations or requirements, four states—Iowa, Montana, Wisconsin, South Dakota don’t require people to wear masks at all, according to Masks4All, a volunteer organization started by researchers and scientists amid the CCP virus pandemic in March.

According to governmental data collected by Our World in Data, the new deaths from the CCP (Chinese Communist Party) virus in America have passed the peak and show a clear downtrend, though new cases have grown slowly in recent weeks.

On Monday, White House Chief of Staff Mark Meadows said there is no national mandate on wearing masks as it is a matter for states to decide, during an interview with “Fox & Friends.”

“Well, it’s certainly a state-to-state issue, as we look across the country, obviously the narrative is the COVID cases are rising, but testing is rising exponentially. We’ve now tested almost 10 percent of our country,” Meadows said as states experienced a surge in the cases of infection in the past few weeks as reopenings happen.

Some states have exempted children five years old or younger from wearing masks because of the risk of suffocation. Others exempt people with a medical condition, mental health condition or disability, those who are deaf or hard of hearing, and those eating at restaurants provided they are social distancing from others.

While West Virginia experienced its highest daily total of CCP virus cases during the weekend, Gov. Jim Justice (R) passed an executive order on Monday making wearing masks mandatory at all indoor public places where social distancing can not be maintained.

The order requires all West Virginians age 9 and above to wear masks but exempts those who have trouble breathing or anyone who is otherwise unable to remove their face covering without assistance.

“I have told you all along we were going to watch our numbers,” Gov. Justice said in a statement. “In the last few days, our positive case numbers have now moved to a level to where if we don’t make a move right now, we’re going to be in a world of hurt.”

The wearing of masks does not apply inside the residents’ homes or vehicles or when consuming food or beverages inside a restaurant.

Texas Governor Greg Abbott (R) issued an executive order on July 2 requiring all Texans above the age of 10 to wear face coverings in public places in counties with more than 20 positive cases of the CCP virus. He also gave the mayors and the county judges the authority to impose restrictions on some outdoor gatherings of over 10 people.

“Wearing a face covering in public is proven to be one of the most effective ways we have to slow the spread of COVID-19,” said Governor Abbott in a statement. “We have the ability to keep businesses open and move our economy forward so that Texans can continue to earn a paycheck, but it requires each of us to do our part to protect one another—and that means wearing a face-covering in public spaces.”

“If Texans commit to wearing face coverings in public spaces and follow the best health and safety practices, we can both slow the spread of COVID-19 and keep Texas open for business,” said Abbott.

The Governor of Kansas, Laura Kelly (D), on the other hand, passed an executive order on July 2, requiring everyone in the state from July 3 onward to cover their mouth and nose with a face covering while outdoor and while being indoor in businesses or organizations.

The order said after a steady trend of “decreasing metrics” there has been an increase in the number of CCP virus linked deaths and hospitalizations and it’s important to take protective measures.

“This worrying trend of increased COVID-19 spread is a danger to the health and safety of every Kansan and also presents a serious threat to reopening and reviving the Kansas economy,” said the order.

“Whereas, wearing a mask in public is the easiest and most effective way to protect each other and help keep our businesses open and our economy running.”

The executive order by the governor making face coverings mandatory requires that people wear face coverings while inside or while entering indoor public space, while obtaining healthcare services, while waiting or riding public transport, and also while being outdoors in public spaces and unable to social distance.

For businesses or organizations, the order requires that all “employees, customers, visitors, members, or members of the public” wear masks or coverings when employees are working in a space that customers or other people visit. Employees should wear face coverings when they visit a space where food is prepared, packaged, or distributed.

Face coverings should also be worn while people walk through common areas like hallways, stairways, elevators, and parking facilities and in other enclosed spaces where they are with people with whom they don’t reside and they are unable to social distance.

Counties and Cities in South Carolina

Several cities in South Carolina like Columbia, Forest Acres, the town of Lexington, and several counties have made it mandatory to wear masks.

Richland County Council adopted an “Emergency COVID-19 Mask Ordinance” order on Thursday which went into effect from July 6 and is based on the CDC’s guidelines which recommend face coverings for people above 2 years of age.

To gain people’s feedback on the issue, the county officials conducted an online poll last month and asked residents about the possible ordinance through phone, email, and social media.

The City of Myrtle Beach also made it mandatory to wear masks after the city council passed an order on Thursday that would remain in effect for 67 days. Violations of the order can lead to a penalty of $100.

“City Manager John Pedersen issued the executive order which requires residents and visitors to wear a cloth facemask at retail and foodservice establishments, as well as in public spaces at overnight accommodations,” said the city council in a statement.

The Rock Hill City Council also approved an emergency ordinance on Monday requiring everyone in public places to compulsorily wear face coverings from Friday for 60 days.