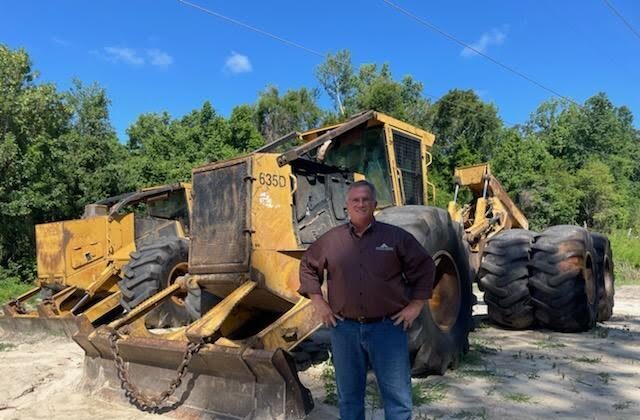 A fourth-generational logger himself, Goodson told The Epoch Times that there have been 11 logging crews in his family.

“My granddaddy had seven boys and three girls, and six of those seven boys had their own logging crews,” Goodson said.

Loggers don’t do it for money, he said, but because it’s a way of life handed down through the generations.

Goodson began logging when he was 11 years old in the summers with his father, he said.

“Once it gets in your blood, it’s hard to get out,” Goodson said.

For someone who’s rooted in the industry, what life will look like after logging is unknown; however, as he said, “I’m fixing to find out because I’m selling my equipment now.”

After 37 years in operation, Goodson is shutting down Goodson’s All Terrain Logging due to what he called a “perfect storm” that could have been weathered if it weren’t for the high fuel costs, he said.

The Biden administration has blamed the increase on the Ukraine–Russia War, embargoes on Russian oil, and inflation.

Republicans blame the high prices on the Biden administration’s policies targeting the oil industry, including suspending new oil drilling leases on federal lands, ending federal subsidies for fossil fuels, shutting down the Keystone XL pipeline, and creating a general climate that is inhospitable to the oil industry while promoting electric vehicles.

‘Everything You Can Think of Has Gone Up’

When there’s a fleet of trucks that gets five miles to the gallon running 7- to 800 miles a day, he said, a fuel increase is a death sentence for a logging company already fraught with issues related to inflation.

“When I started logging, the general rule of thumb was you have the fuel at 25 percent, the driver 25 percent, and 50 percent for everything else, but now fuel is running at 68 percent with the driver getting 30 to 33 percent depending on what people pay,” he said. “So, there’s absolutely nothing there for the truck.”

In North Carolina, logging is a $32 billion industry, Goodson said.

“It begins with the loggers who are at the bottom of the totem pole,” he said. “When we start failing, there’s a whole lot of people who are going to start feeling that pain.”

Loggers make a 3 to 5 percent profit margin, which was barely enough to cover their costs before the fuel prices increased, Goodson said.

“A conventional logging crew is $2 million now, so how can someone invest $2 million with a 3 to 5 percent profit margin?” he asked.

When President Joe Biden got elected, Goodson said he knew fuel prices would shoot up.

“Biden has managed to run this country into the ground,” he said. “If I had tried to wait out this administration, I wouldn’t have had anything to retire on.”

Scott Dane, executive director for the American Loggers Council, said in a June 13 press release that more shutdowns will follow.

“Unlike most industries, the timber industry cannot pass on increased costs caused by fuel and inflation,” Dane said. “Their consumer (mills) simply disregard the request for a fuel adjustment and the information breaking down the additional production and transportation costs. Many have provided partial fuel adjustments but not to the degree necessary to offset the additional expense. It is a take it or leave it business philosophy. As a result, mills in Michigan and Maine are reportedly nearly out of wood. Companies have ‘parked’ their equipment because they cannot afford to operate under the current price structure.”

Goodson, who had three reality TV seasons produced by Discovery Channel about his company called “Swamp Loggers,” said the situation is sad because he’s “lived and breathed this industry,” but that he “couldn’t keep throwing money at a bad situation.”

If there’s a change in the administration in the next election and Biden is replaced by either former President Donald Trump or someone who carries Trump’s pro-American values, Goodson said, “I just may get back at it.”

However, for the time being, he said he’s not going to lose what he has trying to stay afloat in an economy that is being dismantled by progressive agendas.

“I’ve done this my entire life, and now I’ve got to quit because some idiot in the White House who doesn’t know how to do anything is beyond belief to me,” he said. “It’s like he’s doing everything he can to just screw everything up.”