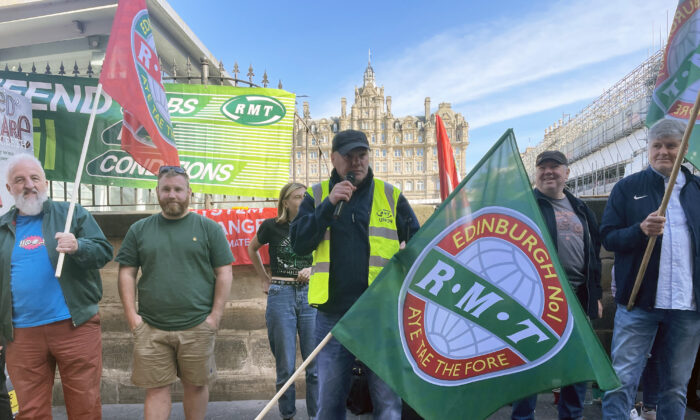 A British trade union boss has said it is “very likely” to see more rail strikes as the government and train operators have been unable to satisfy the unions’ demands.

The UK’s rail network has been paralysed yet again on Saturday after tens of thousands of members of the National Union of Rail, Maritime, and Transport Workers (RMT), the Transport Salaried Staffs’ Association (TSSA), and the Unite union walked out in a dispute over pay, jobs, and conditions.

RMT general secretary Mick Lynch told the BBC that the unions are “determined to get a square deal” for their members and claimed that the public is “right behind us in that campaign.”

On further strikes, he said: “I’ll be talking to senior executives in the industry all through next week trying to create solutions to these problems and then we’ll decide whether we need to take more industrial action.”

“But I’ve got to say that it’s very likely given the gap between us at this time,” he added.

Only around one in five trains are running on Saturday, with some areas having no services all day, as the unions stage their second stoppage in three days.

Football and cricket fans, tourists, and holidaymakers are among those affected by the disruption.

The strike follows a walkout on Friday by London Underground workers and some bus drivers in the capital in separate disputes, which caused travel chaos.

Transport Secretary Grant Shapps said: “It’s clear, from their co-ordinated approach, that the unions are [expletive]-bent on causing as much misery as possible to the very same taxpayers who stumped up £600 ($710) per household to ensure not a single rail worker lost their job during the pandemic.

“Sadly, union chiefs have short memories and will be repaying this act of good faith by ruining millions of hard-working people’s summer plans.”

Foreign Secretary Liz Truss, the frontrunner to become the next prime minister, has said she will not allow unions to disrupt vital public services.

She wrote on Twitter on Friday: “As prime minister, I will not let our country be held to ransom by militant trade unionists.”

Earlier, she told the Daily Express newspaper: “As prime minister I’ll crack down on the debilitating strikes that cripple the vital services that hard-working people rely on.”

Her planned measures include introducing minimum service levels on critical national infrastructure to keep trains, buses, and other services running. She also plans to raise ballot thresholds to make it harder for strike action to take place across all sectors.