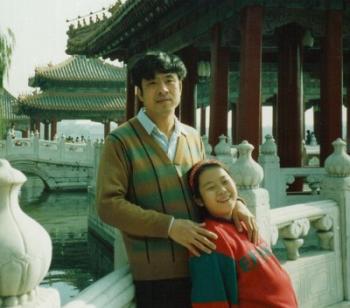 Wang Zhiwen spending time with his daughter, Wang Xiaodan, before he was imprisoned. (The Epoch Times)
China

Falun Gong is a spiritual discipline based on truthfulness, compassion, forbearance, including five exercises. People who practice it have been persecuted by the Chinese Communist Party (CCP) since July 1999. Before then it had attracted between 70-100 million practitioners since its introduction to the public in 1992.

Wang Zhiwen was among the practitioners the article claimed had renounced his beliefs. Xinhua said: “Wang, former contact person of Beijing Falun Dafa Research Association, has changed from ‘not quite understanding Falun Gong’ to ‘finally seeing the reality of it.’”

His daughter Wang Xiaodan, who currently lives in the United States, told The Epoch Times otherwise. She was outraged upon hearing the news, saying “I strongly condemn the CCP for slandering my father. I know my father. He is a steadfast practitioner. It is absolutely despicable that the CCP uses him to manufacture propaganda after putting him in prison.”

The CCP sentenced Wang to 16 years in prison soon after the persecution began in 1999. He has not been allowed to see or speak with any of his family while in prison. He had written several letters to his daughter, but she said he was not allowed to mention Falun Gong. “He encourages me to walk the righteous path and to be a truthful, kind and forgiving person. I can feel from his letters that he still firmly believes in Falun Dafa even though he has to suffer for his belief in prison.”

After the persecution of Falun Gong practitioners began in July 1999 Xinhua, the main mouthpiece of the CCP, printed over 300 articles vilifying the practice.

Those who publicly defend Falun Gong in China face harsh repercussions, and lawyers attempting to represent Falun Gong practitioners have met with harassment, detention, and even torture, in the case of human rights lawyer Gao Zhisheng, who has been held incommunicado since February of this year.

Zhang Erping, a spokesperson for the Falun Dafa Information Center, argues that the CCP’s ten years of “work to transform Falun Gong practitioners” is in fact, he says, “ten years of bloody torture and brainwashing.”

“The CCP clamored to eradicate Falun Gong in three months in 1999. It has not only failed after ten years but has made Falun Gong stronger and known worldwide,” Zhang said, also mentioning that the communist Party has yet to give a meaningful response to evidence of organ harvesting of living Falun Gong practitioners in China.

“It’s ridiculous that the CCP still makes up propaganda on such a large scale,” he said. “The CCP’s needing such propaganda also explains that its suppression of Falun Gong has failed.”