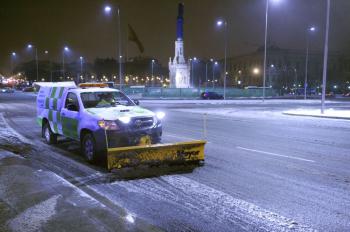 A snow plough clears a snow covered street in central Madrid on December 21, 2009. Snowfall disrupted road and rail transportation in Spain and forced the cancellation of dozens of flights as a cold spell continued to grip much of Europe, officials said. (Dominique Faget/AFP/Getty Images)
Europe

Peter Sedik
View profile
Follow
biggersmaller
Print
As arctic-like temperatures and heavy snow continue to plague European regions, more than 80 people have reportedly died due to the cold, while many have not been able to travel to their families for Christmas.

The Eurostar line between Great Britain and France, suspended during the weekend after five trains got stuck due to freezing conditions, will resume operations on Tuesday, but only the passengers who bought tickets for Saturday or Sunday will be eligible to travel.

Exceptionally cold weather took its worst toll in Poland, where 42 people reportedly died, most of whom were homeless people who froze to death in a drunken state when the temperature went below minus 4 degrees Fahrenheit.

At least 27 people died in Ukraine, and another nine in Czech Republic, where temperatures reached record lows in several cities.

The cold weather in Germany resulted in six deaths, while traffic chaos ensued on train lines, roads, and airport services. On Sunday night, temperatures went below minus 22 degrees Fahrenheit, rendering it the coldest night of the year.

German police reported hundreds of traffic accidents during the weekend. According to the Spiegel newspaper, firefighters were also affected—every drop of water immediately turned to ice.

In Bulgaria, more than 220 villages and towns were left without electricity. Mass electricity outages affected around two million people in France.

Temperatures of 1.4 degrees Fahrenheit caused a train brake failure in Croatia, resulting in an accident leaving 50 passengers injured in the Zagreb main station.

Some European airports in Germany, France, Spain, and Belgium either canceled flights or were closed completely, making many people fearful they would not be able to get home for the holidays.