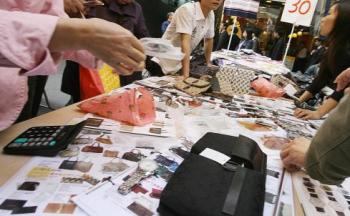 People look at photographs of counterfeit designer bags and watches at a market in the Mong Kok district of Hong Kong 28 November 2007. (Mike Clarke/AFP/Getty Images)
China

While the Chinese Communist Party (CCP) has gone out of its way to ensure a so-called “stable Olympics” —like forcing migrant workers to leave the city, forbidding basements from being rented out during the Games, cracking down on Falun Gong practitioners and Tibetans, among others— the country’s massive counterfeit goods market has remained mostly unchecked.

Sales are booming for vendors who even wear pirated versions of the blue and white Olympic volunteer shirts, posing as Olympic volunteers. Residents have reported that the counterfeit trade, with its saturation of counterfeit DVDs, brand-name clothing, and designer shoes and handbags, is running as normal despite the Chinese regime’s half-hearted attempt at a crackdown on luxury-brand rip-offs, like Gucci and Calvin Klein, before the Games.

However, now that the Games are underway, brands such as Polo, London Fog, Louis Vutton and others are openly sold throughout the capital.

This counterfeit market has infuriated many of China’s Western trade partners who claim their firms lose billions of dollars in revenue each year as a result. Some economists estimate the counterfeit goods trade is worth roughly $560 billion USD, a staggering 5% of global trade.

Despite the obvious untruth, as somewhat ironic report by CCP-propaganda machine Xinhua News Agency said, “Many stallholders at the Silk Street Market, once known as Beijing's largest bazaar for fakes, have been exhilarated this month at seeing throngs of foreign shoppers.” The article was claiming the market had since left behind its counterfeit wares.

The United States filed a case with the World Trade Organization against China last year over the issue.

Experts are also cautioning that consumers be weary of pirated Olympic souvenirs and memorabilia. Although fake winner’s medals and torches have been peddled to unknowing consumers for decades, consumers should be extra cautions at the 2008 Games because they’re buying goods in a place already notorious for forgeries.

China’s Communist regime, however, has not been so absent minded when it comes to protecting its own copyrights. Anyone caught illegally selling the Fuwas, the five Olympic mascots which have been plastered all over official Olympic merchandise and which are sold in licensed shops all over Beijing, face stiff fines and jail terms.