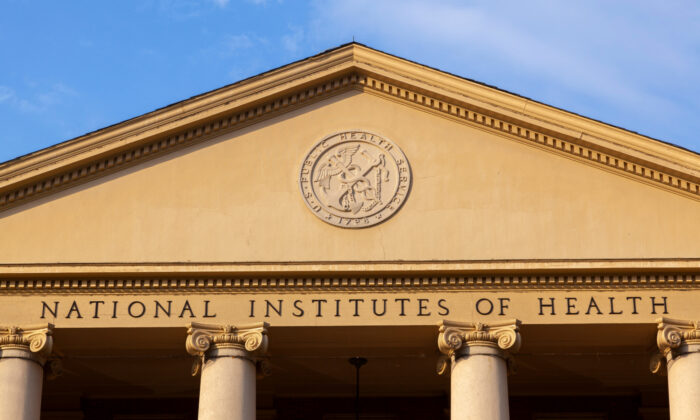 An exterior view of building one of National Institutes of Health (NIH) inside Bethesda campus, in Bethesda, Md., on Nov. 21, 2020. NIH funds majority of biomedical research in United States. (grandbrothers/Shutterstock)
US

Nearly three-fourths of National Institutes of Health (NIH) grantees fail to properly report their researchers’ ties to foreign countries and companies, according to an investigation by the Department of Health and Human Services Inspector General (HHS-IG).

“More than two-thirds of grantees failed to meet one or more requirements for investigators’ disclosure of all foreign financial interests and support. These problems often involved requirements to disclose non-publicly traded equity interests from foreign entities and to disclose in-kind resources, professional affiliations, or participation in a foreign ‘talents’ program,” reads the HHS-IG report, which was made public earlier in June.

“Investigators” are the researchers, scientists, and other individuals conducting research being supported with federal tax dollars received by grantees from NIH.

“Some grantees also were unsure about whether or how disclosure requirements applied to R13 grants, which specifically support conferences and scientific meetings. In addition, some grantees did not comply with federal requirements to train investigators regarding disclosure of foreign financial interests. Further, 10 percent of grantees did not perform required reviews to determine whether investigators’ foreign financial interests were conflicts that could bias their research.”

The NIH has an annual budget of nearly $42 billion, of which approximately $30 billion is distributed in varying amounts to more than 56,000 grantees conducting biomedical research in virtually every major field of inquiry, including allergies, viruses, genetics, aging, and specific diseases.

The HHS-IG report notes that “failures by some investigators at these grantees to disclose substantial contributions of resources from foreign entities (including foreign governments) have raised concerns about threats to the integrity of NIH-supported research.”

The report also found that “37 percent of grantees reported that when they identified their investigators’ support, they did not distinguish whether the source of support was a foreign entity.”

“In 2019, OIG [Office of Inspector General] found that NIH could not identify whether investigators’ financial conflicts involved foreign interests using the information that grantees reported to NIH about FCOIs [financial conflicts of interest],” it stated.

The report was based on a survey that the HHS-IG sent to 773 randomly selected NIH grantees, of which 617 responded. Sixty-nine percent of the respondents failed to satisfy at least one of the foreign ties disclosure requirements under federal laws and regulations.

Among the required disclosures are intellectual property rights and interests such as patents and copyrights that are owned by an investigator and valued in excess of $5,000. Also included are salary and payments for services not otherwise explicitly identified as salary, such as speaking fees, consulting fees, and paid authorships valued at more than $5,000.

The HHS-IG report follows revelations first reported by The Epoch Times earlier this year that an estimated $350 million in secret royalty payments went to more than 1,600 NIH officials, scientists, and researchers from unidentified outside firms between 2010 and 2020.

Those revelations were based on documents and data obtained by OpenTheBooks, a Chicago-based nonprofit government watchdog, through litigation under the federal Freedom of Information Act (FOIA). The NIH still refuses to disclose the specific amounts paid to individual employees or the names of the payers.

Adam Andrzejewski, the watchdog’s president, told The Epoch Times on June 20 that the HHS-IG report added to worries about NIH’s lack of transparency and accountability.

“The concern here is about foreign threats to the integrity and security of U.S. biomedical research. Without reporting compliance, there is no way of knowing the sheer scale of foreign corruption,” Andrzejewski said. “Furthermore, it’s an open invitation for bad actors to hop on the $31 billion NIH grant-making gravy train. Without good reporting and data, there’s no way to know just how much U.S. intellectual property is at risk of being stolen.”

The HHS-IG report also comes as Senate and House conferees are seeking agreement on the details of a conference report to iron out differences between the upper chamber’s U.S. Innovation and Competition Act (USICA) and the lower chamber’s America COMPETES Act.

Sen. Rob Portman (R-Ohio), the top Republican member of the Senate Homeland Security and Government Affairs Committee (HSGAC), wants the conferees to include his bipartisan Safeguarding American Innovation Act (SAIA), which is intended to protect against foreign interests stealing U.S. technologies, in the final report.

Portman’s proposal was included in a bipartisan vote by the Senate last year in favor of the USICA measure, but wasn’t part of the House’s proposal and must therefore be approved by the conferees as part of their conference report.

“[The USICA] invests more than $100 billion of taxpayer funds to solidify the United States’ leadership in scientific and technological innovation critical to national security and economic competitiveness. The bipartisan ‘Safeguarding American Innovation Act’ … will protect the more than $100 billion investment [in] American research and IP from global competitors, like China,” Portman’s office said in a statement.

The latest HHS-IG report isn’t the first time the issue of NIH’s failure to police the foreign ties of its grantees has received congressional attention.

Portman, who isn’t seeking reelection, introduced his SAIA after he co-authored with Sen. Tom Carper (D-Del.) a 2019 analysis that exposed “how American taxpayer funded research has contributed to China’s global rise over the last 20 years. During that time, China openly recruited U.S.-based researchers, scientists, and experts in the public and private sector to provide China with knowledge and intellectual capital in exchange for monetary gain and other benefits.

“At the same time, the federal government’s grant-making agencies did little to prevent this from happening, nor did the FBI and other federal agencies develop a coordinated response to mitigate the threat,” the 2019 report reads. “These failures continue to undermine the integrity of the American research enterprise and endanger our national security.”

At the time of the 2019 report, Portman was chairman of the HSGAC’s Permanent Subcommittee on Investigations, while Carper was the top Democrat on the panel.

Peer reviewers are qualified individuals from the same field as a grantee’s research and have great influence on whether a particular study is funded or accepted as credible.

“NIH guidelines for vetting peer reviewers for potential participation in foreign talent recruitment plans do not require that potential researchers be vetted against any law enforcement database,” the report reads. “Instead, NIH officials rely on ‘reviewing the first page of results from a Google search.’”