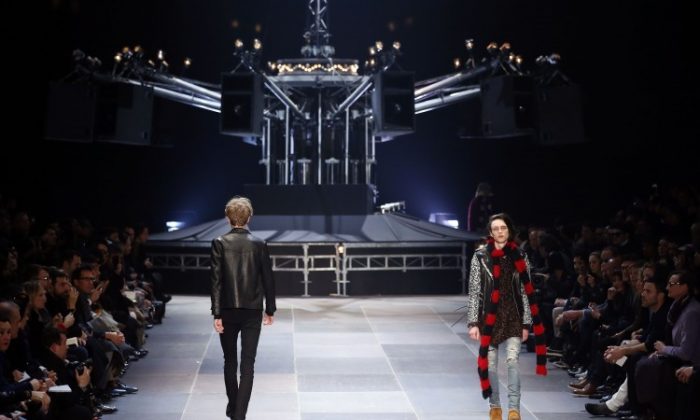 Very thin male models walk the runway during fashion week in Paris. Eating disorders such as anorexia nervosa and bulimia, generally thought of as the domain of young women, are increasingly affecting men, according to a new study. (Patrick Kovarik/AFP/Getty Images)
US

Eating disorders such as anorexia nervosa and bulimia, generally thought of as the domain of young women, are increasingly affecting men, new research suggests.

A study published in the Canadian Medical Association Journal finds that although men have far more treatment options than a decade ago, they may not get diagnosed properly because of the stigma around eating disorders—still considered a “female problem.”

“There are definitely barriers for anyone with an eating disorder in receiving treatment, and for males it can be much more challenging,” says Bear, adding that much of the research to date has focused on girls and women.

NEDIC has launched a poster campaign to raise awareness of the often overlooked problem in men, to help those who may be suffering from it—and their families—recognize the condition, which may start in boys as young as nine.

Though research over the past decade indicates that men account for a quarter of cases of eating disorders—far more than previously believed—treatment is still largely geared toward women, says the study.

The study notes that awareness of eating disorders in men is urgent because they are typically not diagnosed at an early stage, making their health increasingly endangered.

Over the past decade the male fashion ideal has increasingly shifted from strong, muscular physiques to very lean, skinny silhouettes.

This new “ideal” of top designers such as Yves St. Laurent, Marc Jacobs, and Christian Dior, has influenced male fashion around the world, creating unrealistic demands on men to conform to runway images.

This week, controversy erupted over a shockingly thin male model pictured on the catwalk at Paris Fashion Week, igniting the debate over increasingly dangerous standards in men’s fashion.

The photo sparked widespread condemnation on Twitter. With male anorexia or “manorexia” becoming more widespread, many criticized the model agency’s use of an extremely gaunt model.

In an interview with Britain’s Daily Mail, Dinsey said that although it can’t be assumed that the model has an eating disorder, the fashion industry should be more careful when it comes to casting.

“I have been to hundreds of fashion shows so I’m never particularly surprised by the latest ‘shock model picture,’ but casting directors have to take some responsibility,” she said.

Bear says that for men, as for women, eating disorders often occur when the individual feels a loss of control over their life and a lack of healthy coping mechanisms to deal with difficult emotions.

“Whenever there’s a sense of crisis or major discomfort in that individual’s life they may reach back to taking control over food and weight as a way of managing their own lives,” she says.

“They displace their emotions and problems onto their bodies and they try to fix their bodies.”

She says individuals who most often suffer from eating disorders are those who struggle with their sense of self, are perfectionistic, sensitive, and have obsessive-compulsive tendencies.

The condition manifests similarly in both men and women, says Bear, but often men start with excessive exercising and then move to extreme dieting, while women typically start with dieting and move to exercise.

The CMAJ study notes that about half of all men with eating disorders display “problematic exercise,” which can severely damage malnourished bodies.