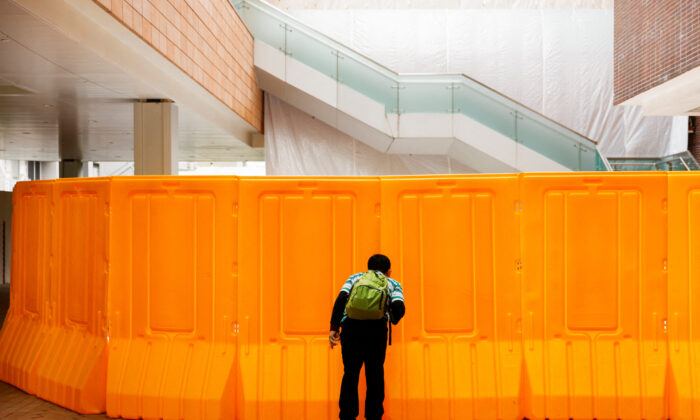 A man tries to peep into the site where the "Pillar of Shame" statue by Danish sculptor Jens Galschiot which pays tribute to the victims of the Tiananmen Square crackdown in Beijing on June 4, 1989, used to stand, after being removed at the University of Hong Kong (HKU) in Hong Kong, on Dec. 23, 2021. (Tyrone Siu/Reuters)
HK Current Affairs

Just before dawn on Dec. 24, the Chinese University of Hong Kong (CUHK) took down a statue depicting a woman holding a flame. The 21-foot tall bronze sculpture, named “Goddess of Democracy,” is a replica of a 30-foot tall white plaster and foam statue erected by art students and brought to Tiananmen Square in 1989.

Hundreds, if not thousands, of protesters were killed during the massacre under communist rule.

In memory of the fallen, the Hong Kong statue stood on the CUHK campus for over a decade since 2010. Yet the university said on Dec. 24 that it was never approved.

“The university never authorized the display of the statue on its campus, and no organization has claimed responsibility for its maintenance and management,” it said in a statement.

Later on Dec. 24, students at CUHK lit candles into the shape of the Goddess of Democracy, in response to the removal of the statue.

The same day, a relief sculpture portraying the crackdown disappeared from a wall at Lingnan University in Hong Kong. The bas-relief included images of a line of tanks halting before a lone protester known as “tank man,” and victims shot by Chinese troops being carried away.

A spray painting of the Goddess of Democracy at the student union on campus was also painted over in grey paint.

Not even on a wall: @lingnanuni has also spray painted over a Goddess of Democracy painting above the student union officehttps://t.co/dSvAXiER27 pic.twitter.com/89wdkcBMXT

Students responded by pasting a sheet of paper with the word “shameful” on the effaced image, which was quickly ripped off by security guards.

Chen Weiming, the artist that created both the statue and wall relief, said he would sue the universities if there was any damage to his works.

The monuments appeared to have joined the fate of a towering “Pillar of Shame” statue at the University of Hong Kong. A day earlier, the statue, showcasing a tall pile of torn and twisted bodies with emotional details depicted, was carted away in parts in a container truck after standing on the campus for more than 20 years.

The text at the base of the sculpture reads, “The old cannot kill the young,” in English and Chinese.

The Council of HKU said it did so “based on external legal advice and risk assessment for the best interest of the university.”

The disappearances of these symbolic monuments at three universities in quick succession mean hardly any public Tiananmen memorials remain in the financial hub, as Beijing has mounted its effort to erase the bloody repression from the public consciousness.

In September, police raided the June 4th Museum in Hong Kong and collected a cut-out of the Goddess of Democracy.

Hong Kong was once the only Chinese-ruled city where people could commemorate the victims of June 4, 1989. Yet local police started to ban candlelight vigils last year—the first time in 30 years—citing concerns about the pandemic.

Nine protesters who participated in the 2020 vigil were given jail sentences in September, ranging from six to 10 months. More pro-democracy activists were found guilty of joining the unauthorized assembly, including media tycoon Jimmy Lai.

The city’s legislature also passed a new film censorship law in October to “safeguard national security.” Movies with content deemed to violate the law will find their license revoked.