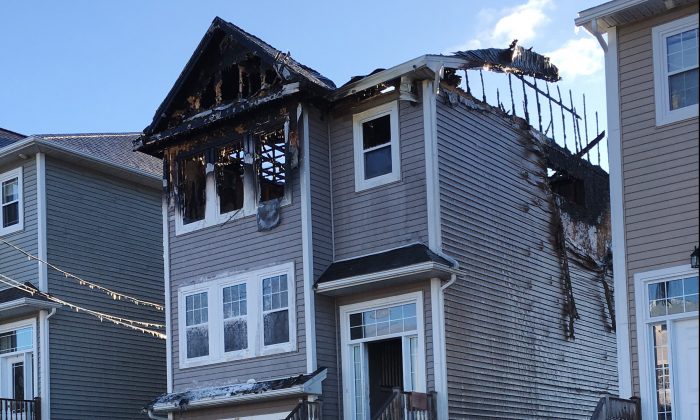 The aftermath of a house fire is seen in the Spryfield community in Halifax on Feb. 19, 2019. (Rob Roberts/The Canadian Press)
Canada

More Help on the Way for Family That Lost Seven Children to House Fire: MP

HALIFAX—One week after a house fire claimed the lives of seven children in a Halifax suburb, the local member of Parliament says the community has come through “in a beautiful way” to help the grief-stricken mother and her badly injured husband—both of whom are Syrian refugees.

Offers of support and donations continue to pour in for Kawthar and Ebraheim Barho, Liberal MP Andy Fillmore said in an interview on Feb. 26.

Halifax Stanfield International Airport, for example, has offered financial support for flights that are bringing some of Kawthar’s overseas relatives to Halifax as she struggles with the unimaginable loss of all her children.

As well, many neighbours have come forward to offer a place to stay for Kawthar and her relatives.

“People have really come together in a beautiful way,” Fillmore said from his office in Ottawa.

Display set up at the Halifax airport in memory of the 7 Barho children. Relatives of Kawthar & Ebraheim Barho are scheduled to arrive to support the couple. pic.twitter.com/vHUhSYo54i

Only one other GoFundMe campaign in Canada has raised more: the $15 million donated to help the families of the 16 Humboldt Broncos hockey players and staff killed April 6 in a horrific highway crash near Nipawin, Sask.

It remains unclear what will happen with the money raised for the Barhos, though Fillmore said it could be used to purchase a new home and cover other expenses.

With the help of Immigration, Refugees and Citizenship Canada, several of Kawthar’s relatives arrived Monday and more are on the way, Fillmore said, adding that all of the new arrivals were admitted to Canada with visitor’s visas.

“They’re in various countries around the world,” he said. “They’re coming in groups … And we’re working on the applications for other groups to get them here.”

However, he declined to offer more details.

“They’ve asked for quite a bit of privacy around this, so I can’t get into details,” Fillmore said. “I would love to be able to share the story, and I know people want to hear it—but they’ve asked that we not (do that) … At some point, they’re going to tell their story.”

As for Ebraheim Barho, Fillmore said he remains in critical but stable condition after undergoing burn surgery on Monday.

BREAKING: The condition of Ebraheim Barho (the father of the seven Syrian refugee children who died in the house fire) has been upgraded to “stable but critical,” according to a family friend alongside him at the hospital. pic.twitter.com/RbbdE47RWS

The Barhos and their children arrived in the Halifax area 18 months ago, initially settling into the small, rural community of Elmsdale, a 35-minute drive north of Halifax.

They later moved to Halifax, where they planned to take advantage of more services, including English-language training.

An investigation into the cause of the fire is ongoing.

Remembering with prayers the Barho children — three-month-old Abdullah; Rana, 2; Hala, 3; Ola, 8; Mohamad, 9; Rola, 12; and Ahmed, 14 and for their parents Kawthar and Ebraheim. https://t.co/HL39Jnnwzs

Deputy fire Chief David Meldrum said there were no updates to offer Tuesday, however he confirmed that once a cause has been determined, Halifax Fire and Emergency will hold a news conference to share the details with the public.

Last weekend, more than 2,000 mourners gathered in a large waterfront hall in Halifax for a funeral that offered support for the Barhos, but also helped express the deep sadness felt by those touched by the tragedy.

As seven, small white caskets were carried to a stage at the front of the cavernous room, the silence was broken by Kawthar’s cries of anguish.