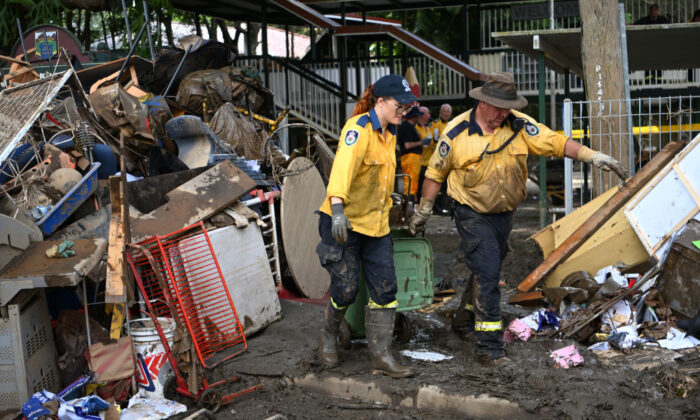 Suncorp Group CEO Steve Johnston, who had spent time with staff and customers in Lismore and the Northern Rivers region, said the floods caused some of the most extensive devastations in his 17 years at the Brisbane-based insurer.

Suncorp was using aerial imagery and real-time data to dispatch assessors to places that needed them the most and had gotten over 32,000 claims from customers so far.

“We are focused on lodging claims, speaking to customers in impacted areas, arranging emergency payment and temporary accommodation,” Johnston said.

At the same time, multinational company QBE Insurance had put aside $1 billion to deal with catastrophes during the 2021/2022 financial year as the sector continued to be surprised by the magnitude of loss caused by natural disasters.

However, people were having a hard time applying for flood relief and getting cash from ATMs without a functioning phone, internet or electricity after the floods destroyed fibre-optic cables and power lines.

“Bank in a box” shipping containers were being set up in car parks, damaged malls and at some evacuation centres so that businesses could drop off deposit bags and people could withdraw money up to $2,000.

From March 12, all Australia’s big four banks—including the Commonwealth Bank, National Australia Bank, ANZ and Westpac—have had the above units or mobile ATMs ready for use in Lismore, while people can access the newly installed ATMs in Gympie and the Ballina campus of Southern Cross University.

“Once the waters recede, the ensuing recovery period will be very long and very slow,” Bligh said.

“It’s not dependent on mobile phone towers or fibre infrastructure—that’s the big problem with the devastation that’s happened down in NSW,” IT engineer Radek Tkaczyk from NetVault said of the satellite dishes.

“The fibre connections were washed away. They’re gone.”

Tkaczyk delivered the donated Starlink satellite dishes worth $10,000 to Lismore by truck and helped the community there install them.

“Some of these communities that we’re talking to have been offline more than a week,” he said.

And he did not understand why people were left without the internet for that long.

“This is the frustrating thing. I don’t know what happened,” Tkaczyk said.

“The most important thing is the dishes are with the people who need them most.

“So the fact they could get a Starlink terminal set up very quickly, make phone calls, update people over WhatsApp, all the Voice Over (Internet Protocol services)— it’s fantastic.”

Meanwhile, many residents in flood affected regions are finding the recovery even more daunting because they were unable to afford insurance prior to the disaster due to high premiums.

The Insurance Council of Australia, a representative body for the general insurance industry in the country, said that the insurance premiums would only become more affordable when councils and governments mitigated the risks by building or upgrading dams and levees, as well as raising homes above the maximum flood threshold.

“But if we want different outcomes, future Australian governments must increase investment in measures to retrofit homes and better protect communities.”

Echoing Hall’s remark, Leplastrier from the Insurance Australia Group (IAG) said the government had to prioritise larger investments in disaster reduction to help shield vulnerable communities from the adverse effects of catastrophes and tackle the underlying risks of floods, cyclones and bushfires.

He said insurance would become more affordable for homes and small businesses in northern Australia with the planned federal reinsurance pool for cyclone and cyclone-related flood risk.