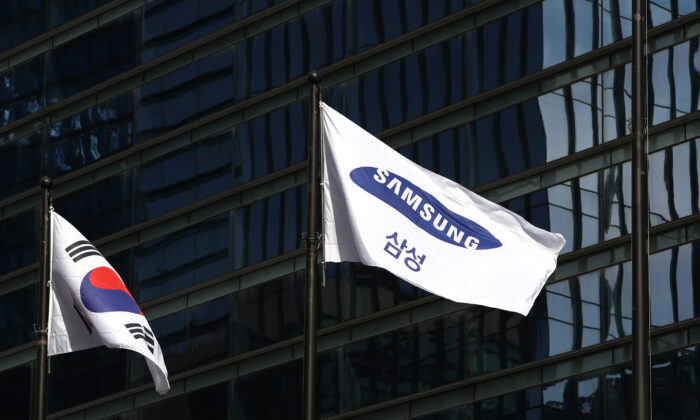 More foreign Fortune Global 500 companies such as, Samsung, Toshiba, and Ericsson, are speeding up withdrawal from China in September, and thousands of workers are facing unemployment.

Since Sept. 8 thousands of employees gathered at the Ningbo plant to protest the closure of the factory, and express their dissatisfaction with the compensation package proposed by management.

The protesters held banners that said “Samsung is my home, I want to work! I need to support my family!” and “The government ‘vacate the cage and replace the bird,’ while the employees get the least.”

“I want to eat [live]!” the workers shouted.

“Vacate the cage and replace the bird” is an industrial restructuring strategy of the Chinese Communist Party (CCP) proposed by Wang Yang, then Party Secretary of Guangdong Province, in May 2008, indicating relocation or elimination of certain industries in the region and replacement or upgrading of other industries in the same region.

A document from the local government, and circulated online, said that Ningbo government has signed an agreement to reclaim about 476 hectares of the land of Samsung Heavy Industries.

Mr. Zhang, an employee of Samsung Ningbo Shipyard, told the Chinese edition of The Epoch Times that on September 12, dozens of special police came to the rally scene, and that no conflict between the police and the employees occurred.

In fact, early in 2020, workers had heard that the government was going to take over the land. “Samsung Heavy’s withdrawal of its investment this time is because the Ningbo authorities unilaterally reclaimed the land and paid Samsung Heavy about $620-770 million as compensation,” said Zhang.

“Ningbo plans to use the land to build a chemical zone,” he said.

The Ningbo officials have not yet confirmed how the land will be used.

“Although the authorities did not mobilize people to boycott Samsung, it was a disguised boycott and expulsion,” said Chinese financial media blogger “Financial Cold Eye” in a Youtube video on September 11.

Toshiba and Ericsson Shutting Down in Two Cities

Japanese electronics giant Toshiba will shutter its factory in the northeastern city of Dalian, Liaoning Province at the end of September, Nikkei Asia said.

Caijing, a Chinese financial media said that on September 11, serval employees of Toshiba Dalian told The Time Weekly that some employees are no longer working there.

Toshiba Dalian was established on September 25, 1991. When the company closes, it will have reached its 30th anniversary.

Swedish telecom equipment manufacturer Ericsson is closing its R&D center in Nanjing, Jiangsu Province and TietoEVRY, a company headquartered in Finland, has agreed to take a 630 of its employees, reported Mobile World Live.

After the outbreak of the U.S.-China trade war coupled with the impact of the COVID-19 epidemic, the global supply chain has seen the importance of disconnecting from the CCP. “Now it is a major trend for the foreign companies of Fortune Global 500 to move their industrial chains out of China,” said Financial Cold Eye.

Japanese Panasonic Group will close its battery plant in Shanghai, China. Panasonic will focus its investments on Central and South America and Southeast Asia, where it has the largest share, said Nikkei Asia in April.

IBM shut down a research institute in China, which operated in northwestern Beijing’s Zhongguancun area for 25 years, reported Today China on Jan. 24.

Apple, Microsoft, and Google planned to move their production lines to other parts of Asian countries like Vietnam, Thailand, CNBC reported on March 4, 2020.

And global consumer electronics makers HP, Dell, Microsoft, and Amazon are all looking to shift substantial production capacity out of China, reported Nikkei Asia on July 3, 2019.