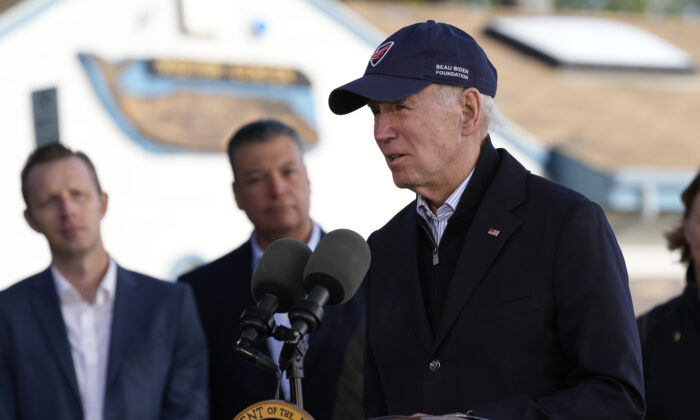 A search by Department of Justice (DOJ) authorities has yielded more documents with classification markings at President Joe Biden’s home in Wilmington, Delaware.

The announcement, made late Saturday by Biden’s personal attorney, Bob Bauer, did not specify the exact number of documents with the classification markings.

“DOJ took possession of materials it deemed within the scope of its inquiry, including six items consisting of documents with classification markings and surrounding materials, some of which were from the President’s service in the Senate and some of which were from his tenure as Vice President,” Bauer said. “DOJ also took for further review personally handwritten notes from the vice-presidential years.”

The new findings come after the DOJ searched Biden’s home on Friday. The DOJ had “full access” to the property, including to “personally handwritten notes, files, papers, binders, memorabilia, to-do lists, schedules, and reminders going back decades,” according to Bauer.

These join other classified government records from Biden’s time as vice president that had been previously uncovered. The first batch of materials was found on Nov. 2, 2022, at the Penn Biden Center in Washington, D.C., where Biden previously had a private office after his term as vice president under the Obama administration.

The find prompted a follow-up search, which led to the discovery of more documents on Dec. 20 in Biden’s Wilmington home, in his garage. More documents were later found in Biden’s home library on Jan. 11 and Jan. 12.

The search reportedly took place over 12 hours throughout Friday. Bauer noted of the Jan. 20 search: “By agreement with DOJ, representatives of both the personal legal team and the White House Counsel’s Office were present.”

Biden and first lady Jill Biden were not present during the search, White House lawyer Richard Sauber said in a separate statement on Saturday.

“Since the beginning, the president has been committed to handling this responsibly because he takes this seriously,” Sauber said. “The president’s lawyers and White House Counsel’s Office will continue to cooperate with DOJ and the Special Counsel to help ensure this process is conducted swiftly and efficiently.”

Attorney General Merrick Garland announced on Jan. 12 he appointed Robert Hur, a former Maryland U.S. attorney, to serve as special counsel to oversee the DOJ’s investigation into the documents to see whether Biden or others illegally handled the documents.

Republicans have launched their own investigation into Biden’s possession of classified materials. House Oversight Committee Chairman James Comer (R-Ky.) on Jan. 13 requested a range of documents from White House counsel Stuart Delery as part of the probe.

Separately, House Judiciary Republicans led by Chairman Jim Jordan (R-Ohio) wrote to Garland and the DOJ requesting documents and communications relating to the appointment of Hur. They told Garland they are “conducting oversight of the Justice Department’s actions with respect to [Biden’s] mishandling of classified documents.”

Correction: A previous version of this article inaccurately stated the number of documents with classification markings found on Jan. 20 at the home of President Joe Biden. The Department of Justice authorities took possession of “six items consisting of documents with classification markings and surrounding materials.” The Epoch Times regrets the error.