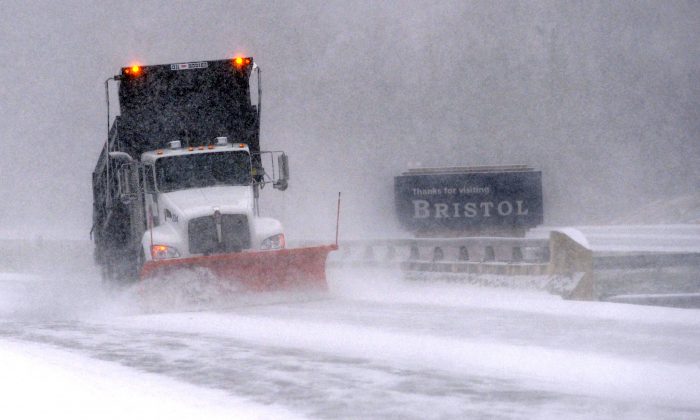 WASHINGTON—As people in the South and East readied themselves for a nor’easter that might bring heavy snowfall by week’s end, snow fell on much of Kentucky and Tennessee and contributed to at least one traffic-related death Wednesday.

The District of Columbia was preparing for blizzard conditions and up to 2 feet of snow, Mayor Muriel Bowser said Wednesday. The city has requested Humvees from the National Guard to reach isolated people and places if necessary.

“If this is a blizzard and we have sustained winds and people lose power, that would be my biggest concern,” Bowser said at a news conference. “We can move the snow. We will move the snow.”

In the areas where blizzard conditions are possible, the weather service warns that travel will be limited if not impossible. The strongest winds and potentially life threatening conditions are expected Friday night through Saturday night.

On Wednesday, the weather service issued blizzard and winter storm watches for parts of Maryland, Washington, Virginia, West Virginia and Arkansas. The watches start as early as Thursday and stretch into Saturday.

“There’s a lot of details that are yet to be seen,” Otto said. “Subtle changes can make a big difference. We’ve seen that in storms in the past.”

Snow in much of Kentucky and Tennessee led school districts and some universities to cancel classes Wednesday and contributed to at least one traffic death, and officials warned motorists to be cautious of slick roads.

The Knox County, Tennessee, Sheriff’s Department says a car slid off the roadway due to speed and slick conditions, killing the driver and injuring a passenger.

Forecasters said another cold front will hit Thursday night and Friday and could dump more snow over the region before traveling eastward.

GEARING UP IN PENNSYLVANIA, NEW JERSEY

Road crews and hardware stores were gearing up Wednesday ahead of the potential winter storm that could dump as much as 16 inches in eastern Pennsylvania.

The National Weather Service predicts that 12 to 16 inches of snow could come down between Friday night and Sunday morning around the Interstate 95 corridor. As much as a foot of snow is possible for Philadelphia’s northern suburbs.

Forecasters say most of New Jersey will likely see several inches of snow.

Although the storm’s impact on southern New England remained uncertain Wednesday, officials are preparing for the worst.

The National Weather Service said there’s a potential for 6 inches of snow or more in the region. High winds and coastal flooding are possible.

But meteorologist Matthew Belk said it depends on the storm’s track.

“You want to be prepared for the possibility for a significant weather storm, but there’s a possibility it might not amount to much,” Belk said.

The storm is expected to miss northern New England. Meteorologist Tom Hawley of the National Weather Service in Gray, Maine, says its path could shift, but right now “all indications are that it will not amount to much” in the region. If the storm says to the south, southern Maine and New Hampshire could see up to 1 to 2 inches of snow at the most. Little to no snow is in the forecast for Vermont.

All major airlines have issued waivers for travel over the weekend, allowing passengers to rebook onto earlier or later flights to avoid the storms. The airports included vary by airline but include some cities in Kentucky, Tennessee and West Virginia all the way up the coast to New Hampshire and Massachusetts.

Organizers of the March for Life say their annual anti-abortion rally in Washington will be held Friday, as scheduled.

The rally on the anniversary of the Supreme Court’s Roe v. Wade decision is one of the largest events on the National Mall. Thousands of abortion opponents gather to listen to speeches before marching to the Supreme Court.

NOT EVEN SAFE FOR A SNOWBALL FIGHT?

Even the organizers of a snowball fight are nervous about the storm that’s expected to hit the nation’s capital.

The Washington D.C. Snowball Fight Association is taking a wait-and-see approach to its gathering in Dupont Circle, tentatively scheduled for Saturday.

“If it is still blizzard conditions, that’s not the optimal conditions. We might have to move it. Maybe to Sunday, maybe later on Saturday,” snowball fight organizer Ami Greener said. “Once it stops snowing, anything is good. Two feet of snow is fine.”

STOCKING UP ON SUPPLIES

Simon Martinez, 48, felt fortunate to find a new snow shovel at a True Value hardware store in northwest Washington. He tried a nearby Home Depot first, without success.

“It’s crazy there,” he said, adding that they were also out of salt.

In Baltimore, Director of Emergency Management Bob Maloney urged residents to make sure they have enough water to last for three days, along with a working flashlight and a battery-operated radio.

He said he’s been getting calls from people asking to hold shovels for pickup on Friday and Saturday. He was getting shovels and snow melt delivered Wednesday.

“We live right around corner so it’s no problem getting here, no matter how bad it gets,” Cohen said. “We’ll be open all weekend.”

if you’re back on the East Coast, get your mittens ready! Winter Storm #Jonas is coming. ❄️ https://t.co/92gT9Zgogo pic.twitter.com/f6l4HJfuF4