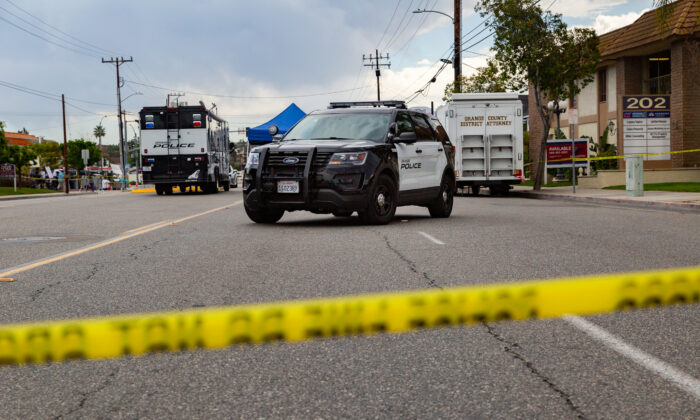 More Details Emerge in Orange ‘Massacre’ That Killed 4, Including Boy

Orange, Calif.—Just days before a gunman stormed into an Orange office complex—killing four people and injuring another—an employee at the targeted company posted a cheery message on Facebook.

“Happy Sunday to you all,” a Unified Homes real estate broker posted on Facebook, alongside a photo of her desk, accessorized with a pot of pink orchids. “Doing what I love is just the best feeling in the world.”

The Facebook poster was not among the victims, and declined April 1 to comment on the colleagues she lost in the shooting.

“This is a very sensitive time for the family,” she said. “We are not going to say anything.”

The adult victims were employees of Unified Homes, said a relative, who was waiting April 1 to learn the identity of the critically wounded woman.

The shootings were not an isolated incident, the Orange Police Department said April 1.

“The preliminary motive is believed to be related to a business and personal relationship which existed between the suspect and all of the victims,” Lt. Jennifer Amat told reporters during an April 1 press briefing.

“It appears all of the adults were connected either by business or a personal relationship, and this was not a random act of violence. The child is believed to be the son of one of the victims who worked at the business.”

The suspected shooter, identified as 44-year-old Aminadab Gaxiola Gonzalez, suffered a gunshot wound and was taken to hospital in critical but stable condition. Police said the suspect used bicycle-type cable locks to secure the gate leading to the building before opening fire.

Gonzalez had most recently been living out of an Anaheim hotel room, and drove a rental car to the shooting scene, police said.

Vania Tovar, whose father owns Unified Homes and who knew some of the victims, recognized the suspect.

“He was the husband of an ex-employee who has not worked there for two years,” she told The Epoch Times. “There was no business relation there.”

He called the shootings a “horrific massacre.”

“I’m here to make something very, very clear,” Spitzer told reporters. “Mr. Gonzalez is eligible for the death penalty. This is a special circumstances case—there were multiple victims. And we are now presently looking at whether his locking of the front and the back gates constituted a lying in wait, which would also be eligible for death.”

Police previously told The Epoch Times the incident was the city’s worst mass shooting in more than two decades.

Five people were killed and two others wounded in that 1997 shooting after a former state employee, Arturo Reyes Torres, 41, of Huntington Beach, opened fire at the Caltrans facility near Batavia Street and Taft Avenue. Torres was shot and killed by police a short distance away from the maintenance yard.

Julio, who lives in the Georgian Apartments across the street from the office building, told The Epoch Times he returned home from work around 8 p.m. after receiving messages about the shooting.

“I was at work the whole time it happened. I had a little time to check my phone at work, and I had a whole bunch of messages” saying there’s a shooting, Julio said. “I thought it was crazy, cause you see it all over the news, and … it happened literally right here.”