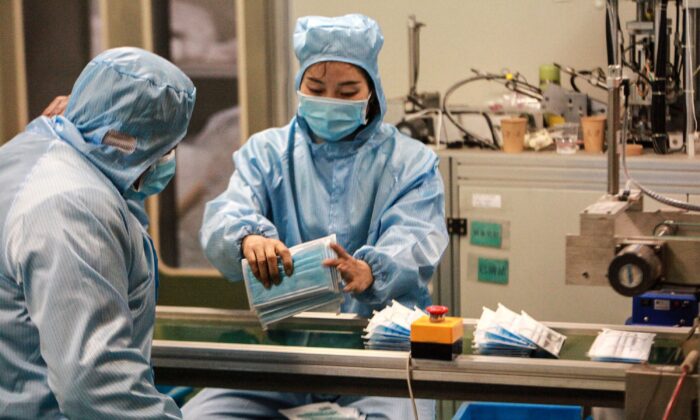 Workers producing facemasks at a factory in Yangzhou in China's eastern Jiangsu Province, on Jan. 26, 2020. (STR/AFP via Getty Images)
By Eva Fu

Defective medical gear from China is drawing growing backlash overseas, with Finland, Britain, and Ireland being the latest to complain about faulty equipment.

Eager to portray itself as humanitarian amid the global pandemic, the Chinese regime has sent medical supplies to virus-hit countries around the world from Spain to Peru. Since March 1, the country has exported around four billion masks, 37.5 million protective suits, and 2.8 million testing kits, according to an April 5 statement by the Chinese customs administration.

Finland, upon receiving 2 million surgical masks from China on April 7 by airlift, described them to be of “disappointing” quality and unsuitable for hospital staff.

“The Chinese market is very chaotic,” Tomi Lounema, managing director of the country’s National Emergency Supply Agency, said in a Wednesday press briefing. He added that this meant that the country has to deal with a large number of obscure suppliers which makes it difficult to trace where goods are made.

Meanwhile, Toronto is recalling more than 62,000 faulty Chinese surgical masks, worth $200,000, that have been distributed to long-term care facilities, according to an April 7 press release. The city is now investigating whether anyone had exposure to the virus while wearing the masks.

Among Ireland’s first batch of personal protective equipment from China, 20 percent was defective, according to local media. The faulty items carry a value of €4 million ($4.37 million). The Chinese embassy in Dublin has promised to replace the equipment, according to The Irish Times. Another 15 percent of the shipment, including white overall gowns, were considered “acceptable for healthcare worker use if the preferred product is not available,” Paul Reid, the director of Health Service Executive, told the media on April 5.

John Newton, the British testing chief, said antibody tests sourced from China were ineffective, as they could only identify immunity accurately in those “who were severely ill with a very large viral load,” The Times reported. The government had ordered millions of antibody testing kits from China last week, but Matt Hancock, UK Secretary of State for Health and Social Care, said on Sunday that “we still don’t have any that are good enough.”

The Netherlands on March 28 recalled around 600,000 masks from China, while the Spanish health ministry also withdrew 58,000 Chinese-made testing kits upon discovering that it had an accuracy rate of only 30 percent.

As demand for protective equipment skyrocketed globally, thousands of Chinese companies have rushed into the medical equipment manufacturing business, drawing concerns over whether the operations meet health and safety standards.

Last week, the Chinese regime tightened rules governing the export of medical equipment in an attempt to address quality concerns. Authorities announced on March 31 that only manufacturers who were accredited to sell their products within China could export test kits, surgical masks, protective gowns, ventilators, and infrared thermometers.

Lin Xin (alias), who used to run a timber manufacturing business in China’s northern Heilongjiang Province, is now helping to facilitate the export of masks to Europe. He said his friends in the clothing and toy industry have converted their factory floors into assembly lines.

He said this was a widespread phenomenon in the province. But a number of these companies started production before acquiring an official license, and several were recently caught, Lin told the Chinese-language edition of The Epoch Times.

“To make money, people are jumping onto the mask manufacturing like a swarm of bees,” he said.

Chen had visited one dust-filled factory where workers handled masks from the assembly line without wearing any gloves or masks.

Lu Honghai, founder of Shenzhen-based e-commerce site Ennews, said he found dead flies and dark spots in a random check of 350,000 masks he had purchased for export.

In response, the manufacturer Aokang Hygienic Materials in Hua County in Henan Province, with whom he placed the order on March 17, agreed to recall 13,000 masks but refused to compensate for the remainder of the order, Lu wrote in an April 3 post on Chinese social media Weibo. He has since filed a complaint with the police.

Lu said a significant portion of these masks has already been sold online to other parts of the world.