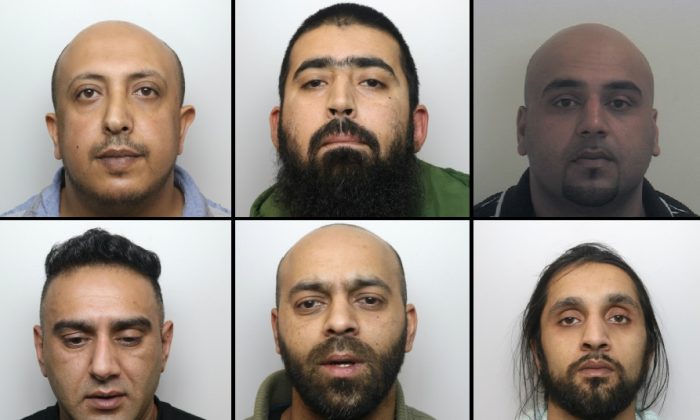 LONDON—An investigation into child sexual abuse by so-called “grooming gangs” in the UK has secured seven more criminal convictions, as police continue to investigate more than 140 suspects in the English town of Rotherham.

With more than 1,500 victims, Rotherham has become a symbol of sexual exploitation of girls by gangs of predominantly Pakistani and South Asian heritage—often referred to as Asian grooming gangs—across northern English towns and cities, since reports began to emerge in 2010.

In 2015, the National Crime Agency (NCA) set up the largest operation of its kind to investigate 16 years of abuses in Rotherham, securing its first convictions last year. On Oct. 29, seven more were convicted at Sheffield Crown Court, for a range of child sexual-abuse offenses between 1998 and 2005 that included rape, sexual assault, and false imprisonment.

“The men would ply the girls with drugs and alcohol, and threatened them with violence or being transported and abandoned in an unfamiliar location if they didn’t comply with the sexual demands,” said the NCA, in a statement.

“The girls said that the abuse was mainly carried out at night in a variety of secluded or derelict locations, including empty houses where there was no electricity. They were often sexually abused on mattresses on the floor and locked in rooms so that they couldn’t escape.”

NCA’s Operation Stovewood currently has 22 separate investigations into sexual-abuse cases in Rotherham between 1997 and 2013.

The fact that the abuses were carried out predominantly by “Asian” men has proven controversial. In the UK, “Asian” often refers to people from the Indian subcontinent, typically Pakistan, or sometimes the Middle East.

Local Rotherham lawmaker Sarah Champion resigned from her position as lead on equalities in the opposition Labour Party after being criticized for an article she wrote on the scandal.

“Britain has a problem with British Pakistani men raping and exploiting white girls,” she wrote in the article in The Sun.

A 2015 government-commissioned report into the Rotherham abuses said: “Children were sexually exploited by men who came largely from the Pakistani heritage community. Not enough was done to acknowledge this, to stop it happening, to protect children, to support victims and to apprehend perpetrators.

“The council’s culture is unhealthy: Bullying, sexism, suppression, and misplaced ‘political correctness’ have cemented its failures.”

The British police watchdog in 2017 initiated its second-largest-ever operation, to investigate complaints about how police handled reports of grooming in Rotherham.

According to local census data, those of South Asian heritage make up only around 10,000 of Rotherham’s total population of 260,000.

Rotherham is one of a number of British towns and cities in which widespread sexual grooming of young girls has been brought to light in recent years.

Responding to the Huddersfield sentencing, interior secretary Sajid Javid wrote on Twitter: “These sick Asian pedophiles are finally facing justice. I want to commend the bravery of the victims. For too long, they were ignored. Not on my watch. There will be no no-go areas.”

Javid, a second-generation Pakistani immigrant, was criticized by some for raising the ethnicity of the criminals.

In a later interview, he explained that it made him angry that they had “disgraced our heritage.” Javid told the Times there “must be some cultural connection, some reason.”

Javid said he’s ordered an investigation into whether any cultural factor may be behind the trend.

“I like to be driven by the evidence,” he told the Times. “That’s why I ask the experts.”

A report by counter-extremism organization Quilliam in 2017 said that nationally “84 percent of ‘grooming gang’ offenders were (South) Asian, while they only make up 7 percent of total UK population and that the majority of these offenders are of Pakistani origin with Muslim heritage.”