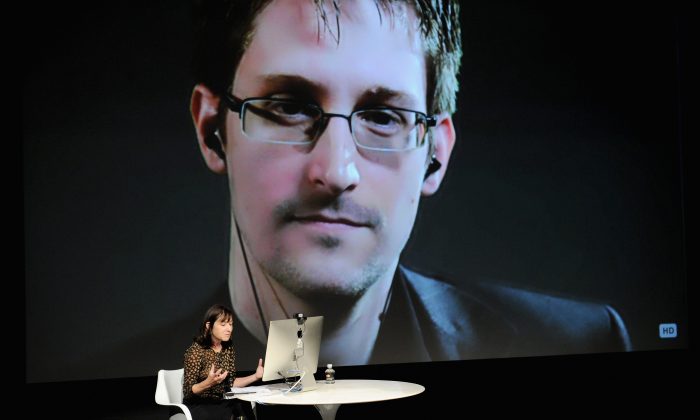 General view of atmosphere at the Edward Snowden Interviewed by Jane Mayer at the MasterCard stage at SVA Theatre during The New Yorker Festival 2014 on October 11, 2014 in New York City. (Bryan Bedder/Getty Images)
US

More classified United States government documents from the Edward Snowden leaked archive have been made public.

Online publication “The Intercept” announced the release of hundreds of National Security Agency (NSA) documents on May 16.

Additionally, “The Intercept” will broaden its access to NSA whistleblower Edward Snowden‘s archive.

Penned by Glenn Greenwald, the statement speaks of “two innovations” of the publication and reporting of the Snowden archive.

The first innovation is the on-going release of NSA documents originally leaked to certain media outlets by Snowden during 2013.

Articles from an internal NSA newsletter make up the first batch of documents.

Titled “SIDToday,” the publication served “the most important division” of the NSA, the Signals Intelligence Directorate.

The documents discuss “the NSA’s role in interrogations, the Iraq War,” and “the war on terror” amongst other topics.

No information is provided as to when the next batch of documents will be released.

The “primary objective” of the batch releases will be to “encourage other journalists, researchers, and interested parties to comb through these documents.”

Inviting outside journalists and “foreign media outlets, to work with us to explore the full Snowden archive” is the second innovative initiative “The Intercept” is undertaking.

Journalists at the French publication “Le Monde” will now have access to the full Snowden archive.

Edward Snowden was a former CIA employee who leaked a trove of classified NSA documents in 2013.

Currently residing in Russia in asylum, Snowden is wanted by the U.S. government for espionage.

The whistleblower’s story has inspired the film, “Snowden,” which is set to be released in September. Watch the trailer below.