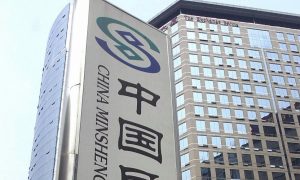 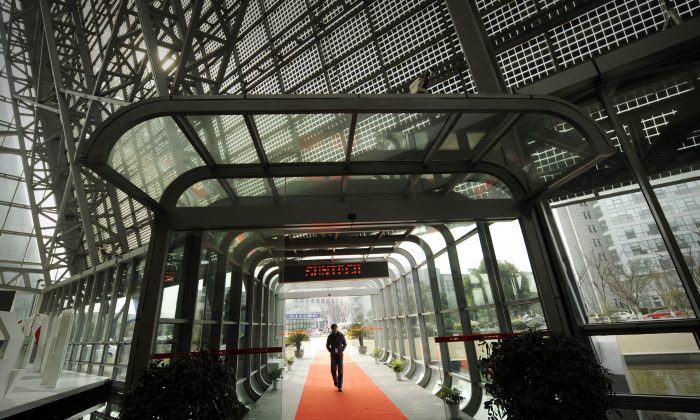 A visitor enters the offices of the now bankrupt Chinese company Suntech in the eastern Chinese city of Wuxi, Feb. 27, 2012. One of its subsidiaries filed for bankruptcy earlier this year, highlighting the perils now facing many industries that accumulated overcapacity over years of artificially cheap financing. (Peter Parks/AFP/Getty Images)
China

After years of rapid debt-fueled growth, the overcapacity that has been pumped into many Chinese industries is beginning to float to the surface: a wave of bankruptcies has struck, and industries that were previously the darlings of China’s industrial policy now look much shadier, with growing debt and more bankruptcies predicted. Many local governments, who also rode the bubble, are not faring much better.

China’s economy is already in a financial crisis, Xia Bin, an economist at the Development Research Center of the State Council, said at a forum in Beijing on July 14.

“Some companies should have filed bankruptcy, and some local government financing vehicles have long been insolvent,” Xia said.

“The crisis has not exploded and bad loans have been covered up due to the central bank’s practice of issuing more money,” he added.

Jiangxi Pingte Iron and Steel Co. in eastern China’s Jiangxi Province, has been declared insolvent and shut down in late June. 6

After Chinese banks experienced the worst cash crunch in a decade in mid-June, the State Council issued a statement on July 5 saying that it will maintain a “prudent” monetary policy to support economic restructuring,

According to the statement, financial support is encouraged for the advanced manufacturing industry and promising emerging industries. However, in industries with severe overcapacity, the government will “adopt differentiated supporting policies,” state media Global Time reported.

Yonghao Pu, regional chief investment officer for Asia-Pacific at UBS, predicted that this will trigger more bankruptcies in China.

China’s major problem is too many low-end manufacturing products, Pu said during a press conference on July 8, according to Chinese Reuters.

In particular in government-backed industries, sectors with overcapacity are likely to face bankruptcy, he said.

“Bankruptcies will be more prevalent in the second half of the year, and it might even happen to some state-owned companies,” Pu noted, with the proviso that Premier Li Keqiang would let the market drive the economy, as he has indicated.

A report by topnews9.com, a Guangdong-based web portal providing financial and business news and information, also predicted that more industries in China will be threatened by bankruptcy—again, assuming that policy makers will indeed focus on policies aimed at restructuring the economy, while denying ongoing stimulus measures, and keeping monetary police at a prudent level.

Early last month China’s National Audit Office released a report based on research conducted on 36 local governments in 2012, showing that they were all under great debt pressure and had to roll over old debt by taking out new loans. Among them, 16 local governments were already insolvent, the Shanghai-based Xinmin Weekly reported on July 10.

According to economist Xia Bin, now is not the time for policy makers to discuss whether systemic risk exists in the economy, because that is already obvious. “Instead,” he said, “they need to quickly find ways to let the bubble burst and write off the losses to prevent a large-scale crisis from breaking out.”