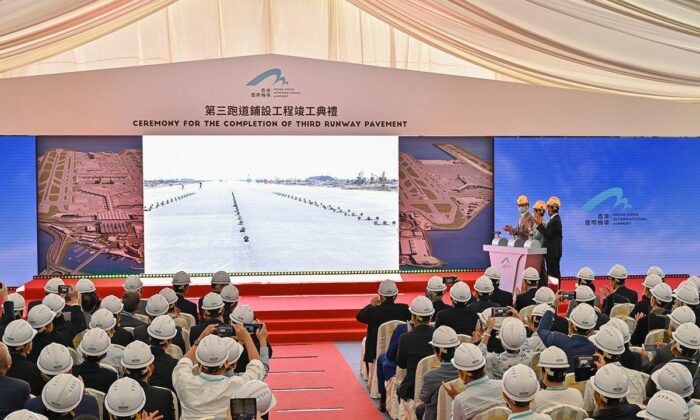 The ICAC charged three foremen of one subcontractor, and two construction workers, who participated in the HK International Airport’s third runway (“Runway Three”) project. They were suspected of soliciting and receiving illegal rebates totaling more than HK$200,000 (US$25,480) from seven scaffolders, carpenters, and iron-setters, in helping them secure both initial and continuous employment with MLife Engineering Limited (MEL). The ICAC has charged 13 people so far and said the investigation is still ongoing, and cannot rule out further arrests and prosecutions.

The ICAC has taken a series of enforcement actions since last year to crack down on illegal rebates from construction workers. Earlier, nine people were charged in the said “Runway Three” project, accusing them of receiving illegal rebates from 16 construction workers. After seeking further legal advice from the Department of Justice, the ICAC has recently prosecuted five more people in three separate cases, one of whom had been charged earlier in a similar case. The five have been granted bail by the ICAC and will appear at the West Kowloon Magistrates’ Courts on Sept. 5.

Another former foreman of MEL Chow Fuk-leung, 62, and a former construction worker of MEL, Chan fai-ching, 28, was charged with a total of three counts, namely, one count of conspiracy for agents to accept advantages, and two counts for agent accepting an advantage.

The ICAC pointed out that MEL was a subcontractor of the “Runway Three” project at the time of the crime, responsible for recruiting construction workers to carry out various types of work. Such recruitment was mainly based on the introduction of construction workers. Zhuang Huitao, Meng Zhijiang, and Chow Fuk-leung worked as foremen, and each led their team of construction workers to carry out scaffolding, carpentry, and steel bar bending on the project site, respectively. Huang was the scaffolder in Zhuang’s group, and Chan Fai-ching was a steel bar bender in Chow’s group.

The first case occurred between June 2020 and March 2022. It charges Zhuang Huitao for allegedly soliciting rebates of HK$100 (US$13) per working day from a scaffolder in his team. During that period, he received illegal rebates totaling more than HK$18,000 (US$2,300) from the scaffolder in return to guarantee the victim continuous employment with MEL.

Zhuang Huitao and Huang Dehou are also suspected of conspiring with other persons to accept illegal rebates totaling more than HK$96,000 (US$12,230) from three other scaffolders to assist them in getting hired, plus subsequent continued employment at MEL.

The second case occurred between Aug. 2020 and April 2021. The charge alleges that Meng Zhijiang conspired with others to receive illegal rebates totaling more than HK$66,000 (US$8,400) from two carpenters to assist the two in their initial hiring and subsequent continued employment at MEL. One of the conspirators was the then foreman who introduced Meng to MEL in the first place.

Meng is also suspected of offering illegal rebates ranging from HK$100 (US$13) to HK$200 (US$26) per working day to the foreman to get himself hired and then continued to be employed by MEL.

Meng was also suspected of conspiring with the foreman to instruct the two above-mentioned carpenters and their team members to make false statements to the ICAC officers, claiming they and other workers had not paid rebates to Meng and the other foreman.

The third case occurred between Nov. 2020 and Feb. 2021. The charge alleges that Chan Fai-ching was suspected of conspiring with Chow Fuk-leung to obtain illegal rebates of HK$500 (US$65) per working day from another steel bar binder in Chow Fuk-leung’s team. In addition, Chow is suspected of receiving illegal rebates totaling HK$14,000 (US$1,780) from that steel bar bender to help the other party continue to be employed by MEL.