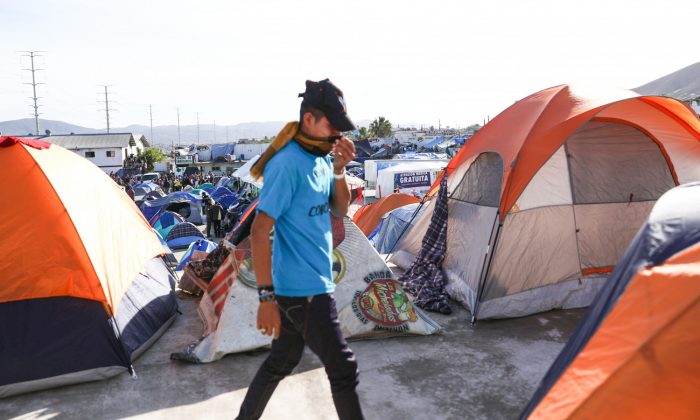 The new migrant camp, 10 miles from the U.S. border, in the Mariano Matamoros neighborhood of Tijuana, Mexico, on Dec. 2, 2018. (Charlotte Cuthbertson/The Epoch Times)
US News

A man named Carlos from Honduras arrived in Tijuana on January 29 under the new policy, called the Migrant Protection Protocol (MPP). He is the first of many asylum seekers from the Northern Triangle who will be sent back to Mexico until their immigration court date in the United States—at which point, they will be allowed to enter the country to attend their hearings.

Honduran migrant Marlon Ariel Mendez was part of a group of asylum-seekers who were returned to Tijuana on Jan. 30. Mendez, 19, told reporters he was glad to be back in Mexico, after being detained in a immigration detention facility.

“Thanks to God, I didn’t want to be there (in detention), above all else because of the food,” he said.

Secretary of Homeland Security Kirstjen Nielsen’s visit to San Diego’s San Ysidro Port of Entry kicked off the start of the policy on Jan 29. That day only one asylum seeker walked back through the port gates, although the United States has said it will send 20 per day.

In fiscal year 2017, border patrol apprehended 94,285 family units from Honduras, Guatemala, and El Salvador at the Southern border. Of those, 99% remain in the country today, according to the Department of Homeland Security.

So far, the policy is only active in San Diego’s San Ysidro Port of Entry, the busiest border crossing in the country. Thousands of migrants from the Northern Triangle countries arrived in nearby Tijuana last year. It’s also believed to be the destination of the latest Honduran caravan headed north.

Cover said local coyotes also tell minors they have a better chance if entering the United States if they go alone.

“Today the United States returned to the first Central American foreigner to Tijuana, something unprecedented, incredibly @lopezobrador_ and the @GobiernoMX agreed to receive the Central American, fulfilling the instructions of @realDonaldTrump and violating the national sovereignty, shameful!”