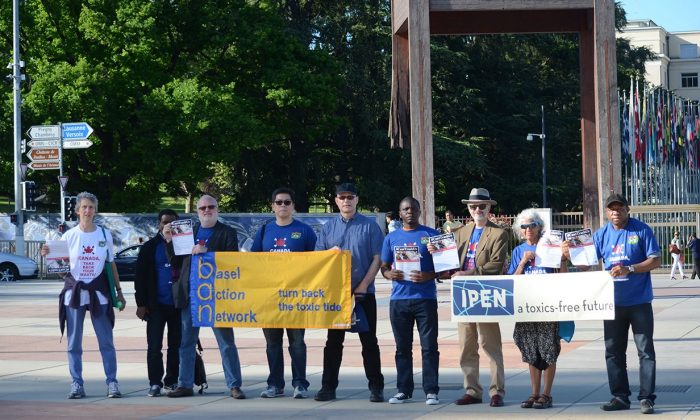 Members of Basel Action Network, IPEN, and other groups protest outside a conference related to the Basel Convention in Geneva, Switzerland, on May 10, 2015 over household waste shipped to the Philippines from Canada. The groups want Canada to take back the containers, which they say violates the Basel Convention. (John Wickens/IPEN)
Canada

Environmental groups are alleging that a second lot of containers full of Canadian waste have been shipped to the Philippines and left abandoned at the Port of Manila. The allegations were prompted by a leaked document from the Philippines Bureau of Customs.

According to Philippines news reports citing an anonymous customs official, 48 containers full of household waste arrived between December 2013 and January 2014.

“There has been no inspection yet. The shipment is for abandonment since it has been there for a long time,” the official told the Manila Bulletin.

A June 3 email from the Department of Foreign Affairs says Canada “has not received any confirmation from the Government of the Philippines about the supposed shipment.”

The containers are similar to 50 shipped to Manila in the spring and summer of 2013 by Ontario-based company Chronic Inc. that were declared as containing plastics for recycling. After the giant containers had sat at the port for months, officials opened them only to find a mixture of plastics and stinking household garbage, including used adult diapers.

At the time, a customs official said the contents “could pose biohazard risks for our people.”

A coalition of groups, along with some Philippines politicians, has called for the containers to be returned to Canada, and an online petition to that end has garnered thousands of signatures.

The groups maintain the shipments are a violation of the Basel Convention, an international treaty to which both Canada and the Philippines are signatories that prohibits developed countries from shipping waste to developing ones.

“The public consensus is to have it returned,” said Jezreel Belleza, media and communications assistant with the NGO Toxic Ban, in an interview from the Philippines. “There has been a lot of angry public reaction.”

Belleza’s group is considering legal action to ensure all the containers are returned to Canada.

“We want the two nations to respect the Basel Convention, and this is the exact situation why it was created in the first place,” she said.

Chronic Inc., which sends plastics to the Philippines to be sorted and resold, also shipped the second lot of containers. However, the owner has denied accusations of shipping garbage.

Regarding the first shipment, Makris told the Toronto Star in 2014 that it would be impossible for such waste to get into the containers, which are inspected before they leave Canada. He said the contents were “95 per cent plastic” along with some paper and aluminum, adding that he found it “beyond even understanding what’s going on.”

A formal letter from the Canadian embassy in the Philippines to the international NGO Basel Action Network states that Canada “has worked with the shipper and with the Government of the Philippines to find a solution to this waste shipment, in accordance with our two countries’ respective regulations and legislative frameworks.”

However, the letter goes on to say that Canada lacks legislation to deal with the issue of returning the containers.

“Currently there are no domestic laws which the Government of Canada could apply to compel the shipper to return its containers to Canada,” states the letter, dated march 10.

The email from Foreign Affairs says the issue is “a private commercial matter.”

At the Conference of the Parties to the Basel, Rotterdam, and Stockholm Conventions in Geneva last month, Richard Gutierrez, an international environmental law expert, gave a speech criticizing Canada for the situation and accused it of violating the treaty.

Jim Puckett, the director of Basel Action Network, was at the conference.

“Canada stayed silent and didn’t take the floor. It is really shocking that a country like Canada who is a leader in the Basel Convention has been caught out for not properly legislating their treaty obligations,” he said.

“What the treaty says is that when things go wrong like this you have to bring it back or you can find another alternative environmentally sound method, but you absolutely have to prosecute the exporter, and Canada has done none of those things.”

A similar case in 2013 involved a shipment of what was supposed to be plastics sent from the U.K. to be recycled in Brazil. However, it was found that the containers instead contained used medical items, including needles. The result was a return of the containers, and the exporter was fined £85,000.

“That’s the proper response under the Basel Convention,” said Puckett.