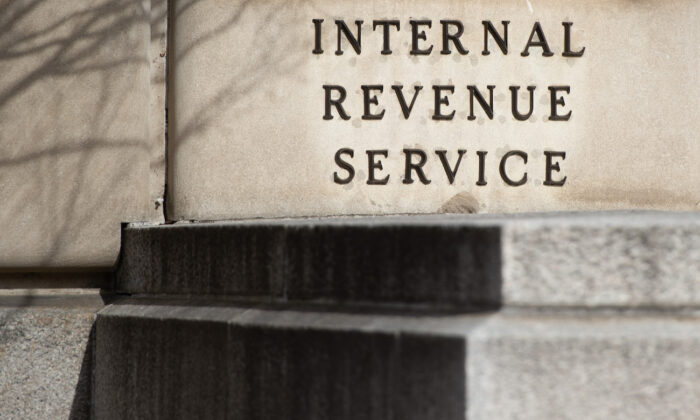 A new video shows college-aged students in an IRS recruitment program carrying mock guns and preparing to make arrests of suspected tax criminals, following shortly after President Joe Biden signed into law a bill that would give billions of dollars to the agency in order to conduct more frequent and scrupulous tax audits.

The video was highlighted by Rep. Thomas Massie (R-Ky.), who tweeted a link to the clip while suggesting that the video would dissuade anyone who “thought the IRS needed 87,000 more agents to help you with your tax returns and audit billionaires,” hearkening to the Biden administration’s rhetoric about the additional IRS funding in the Inflation Reduction Act, which President Biden signed into law last month.

The Inflation Reduction Act provides $80 billion of additional funding to the IRS over the span of 10 years, allowing the agency to hire nearly 87,000 new employees—more than doubling the agency’s total staff.

The video shared by Massie features the IRS’s Adrian Project, a recruitment project which has operated since at least 2007. In the video, college students wield toy firearms, wear bulletproof vests, and perform mock arrests, as the prospective recruits are introduced to the duties of IRS special agents.

“The students sharpen their forensic accounting skills and are introduced to interviewing suspects, conducting surveillance and document analysis. The day ends when the students solve the crime and arrest the mock offender,” the IRS said about Adrian Project participants.

The IRS Criminal Investigation division has kept weapons and ammunition for decades, which it uses to pursue dangerous and crime-affiliated federal tax criminals. However, with the recent raise of funding for the agency, many observers are becoming concerned that the arming of the IRS could be a tool of political repression.

These revelations caused public trust in the IRS to plummet. The same year as the IRS targeting controversy, Gallup conducted a public opinion poll of nine government agencies, of which the IRS ranked the lowest, with 42 percent of respondents claiming that the IRS did a “poor” job compared to only 27 percent claiming “excellent” or “good” performance from the agency.

Naturally, the new funding provided for the IRS and the revelations about the prevalence of weapons in the agency have raised alarm among some observers, especially political conservatives, who fear that a militarized IRS could be exploited to punish political enemies.

“Joe Biden is raising taxes, disarming Americans, so of course they are arming up the IRS like they’re preparing to take Fallujah … 5 million rounds of ammunition, 4,500 firearms, automatic weapons and $731,000 of taxpayer money spent this year to quite literally weaponize your government against you,” Rep. Matt Gaetz (R-Fla.) said in an interview with Tucker Carlson on Fox News.

Last July, Gaetz introduced the “Disarm the IRS Act” to Congress, a bill that would prohibit the IRS from purchasing weapons and ammunition. The bill has not been passed into law.