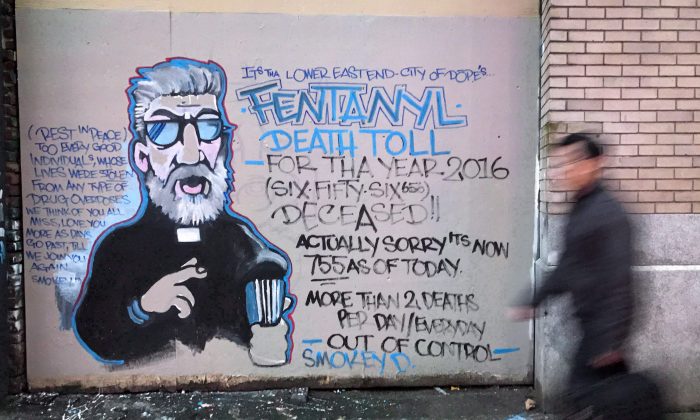 A mural in the Downtown Eastside of Vancouver by street artist Smokey D. painted as a response to the fentanyl and opioid overdose crisis, Dec. 22, 2016. (The Canadian Press/Darryl Dyck)
Canada

VANCOUVER—Health Canada’s proposal to loosen regulations on importing prescription-grade heroin to treat opioid addiction is being hailed as a crucial step to reducing fentanyl-fuelled deaths across the country.

“The need is so profound in B.C. and other provinces. It’s so necessary to look at the failures of drug prohibition and to see what other options are available to deal with this crisis,” Shane said.

“It seems that were this crisis related to any other population it would be dealt with differently, it would be more of a priority for every level of government,” she said, adding stigma against drug users has prevented increased access to medication for a legitimate health issue.

British Columbia is the hardest-hit province when it comes to opioid deaths, with 347 fatalities recorded by the coroners’ service between January and March of this year.

Canada approved prescription heroin treatment in September 2016 for substance users who did not respond to other therapies such as methadone and suboxone.

The new rules would allow health authorities to import a year’s supply of prescription-grade heroin or other drugs in bulk for a public health emergency such as a flu pandemic if the medication is not sold domestically.

“Our government is determined to work with our partners to help reduce the harm to citizens and communities that are associated with problematic substance use,” federal Health Minister Jane Philpott said in a statement.

The urgent nature of the overdose issue means the consultation period for Canadians to share their views on the proposal has been shortened to 15 days, from about 75 days.

Dr. Scott MacDonald is lead physician at Vancouver’s Crosstown Clinic, where about 100 people are currently being treated with prescription heroin, or diacetylmorphine, at the only such facility in North America.

“This is a very important tool to attract people into care,” MacDonald said of the new regulations, adding societal costs such as for repeat hospitalizations, crime, and incarceration would be reduced.