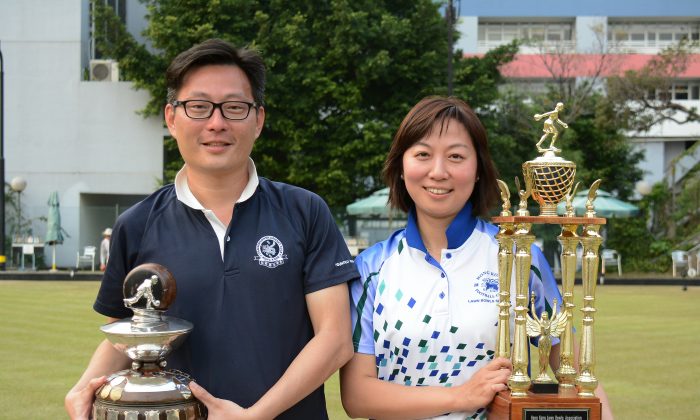 This is also the fourth consecutive year that both champions were new winners of the competition.

Fung and Yu both qualified to play in the CoC as the champions of the National Indoor Singles.

Fung won all the games in the two roundrobins, and then defeated Peter Lai from Seabird Sports Club at the semi-final to face the reigning National Singles Champion Ken Chan in the final.

The game was very tight as both displayed highly skillful drawing and tactical shots. The winning position was switched between the two players a number of times and the scoreline was tied on four occasions, at 5:5, 7:7, 8:8 and 15:15.

Fung then took one shot in the next end and needed just one more shots in the following end to finish the game. In the last end, Fung drew a shot that was almost touching the jack and had two bowls at the back. Chan played a heavy shot to try to take the shot out, he hit the shot bowl and pushed the jack into the ditch. Fung’s back woods won the shot and the game.

Fung was grateful about winning the title as he almost missed the competition completely, “My son has been in high fever this morning and I was struggling whether to come or not. Thankfully my wife was very understanding and encourage me to come.”

“I have been very tired lately and did not train much. I was struggling during the two days competition and was just lucky to win some of the games. In the final I was facing the best bowler in Hong Kong so I just relaxed, focused on my drawing and minimizing the errors. Finally I continued my luck and won the game,” said Fung. He also expressed his appreciation to his teammates from Craigengower Cricket Club who came to support him.

In the women’s section, Yu also won all her roundrobin games and played Joyce Cheung from the Association of HK Yunnan Fellow Provincials in the final.

In the first 10 ends the game was pretty even, with Yu winning by just a shot. However from then on Yu picked up the pace and won six of the following seven ends to finish the game 17:7.

This is Yu’s third participation in the tournament and she is happy with her overall performance the competition, “I think I played quite well throughout and the control of weight and green is good. Occasionally there were some unstable performance due to tiredness but overall is acceptable.”

The win was a big boost for Fung and Yu as they will fly to Australia for World Cup Singles Championship today, March 10. The competition will start next week at the Warilla Bowling Club indoor greens with 21 countries participating.

This week in Lawn Bowls
This week on both Saturday and Sunday, March 12-13, is Tiger Bowls from 9:00am to 6:00pm each day at all greens in Hong Kong.