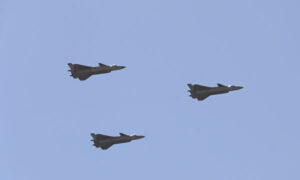 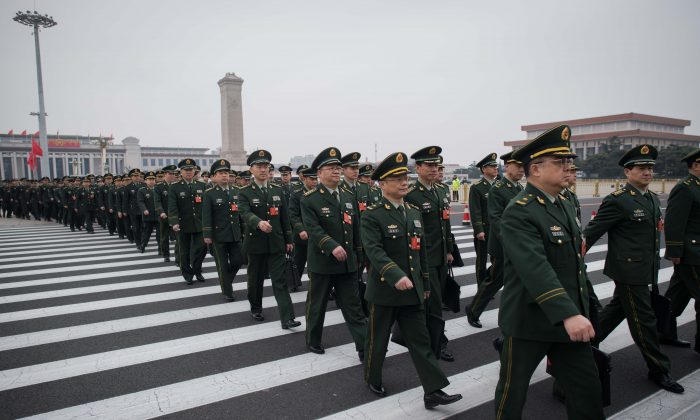 Military delegates arrive for the National People's Congress at the Great Hall of the People in Beijing on March 11, 2018. (NICOLAS ASFOURI/AFP/Getty Images)
Thinking About China

Benjamin Franklin once said, “Never ruin an apology with an excuse.” In the wake of the obvious fact that the U.S.-led Western effort to democratize China through so-called constructive diplomatic and commercial engagement has failed over the decades, advocates of this policy may now feel compelled to have something to explain.

In “How the West Got China Wrong,” The Economist confessed, “It was a worthy vision. … The West has lost its bet on China.” If anything, the reverse of the West changing China has occurred.

Professor Andrew Nathan of Columbia University noted in an interview with ChinaFile, “Not only are we not changing China, but China is changing us,” citing two scholarly research reports on Chinese influence activities in New Zealand and in Europe.

Nathan also said, “We are becoming aware of similar uses of soft power and money power to influence politics and opinion in the United States.”

Perhaps one of the Chinese regime’s most notable overseas infiltrations is its successful installation of Confucius Institutes on Western university campuses, including here in America.

While being ranked No. 104 in the world for its expenditure on education, according to the World Bank, Beijing boasts funding 1,000 such propaganda institutes around the world, in an effort to help promote its overseas agenda through its carefully selected textbooks and faculty.

Former U.S. diplomats Kurt M. Campbell and Ely Ratner contend in their article “The China Reckoning—How Beijing Defied American Expectations,” published in Foreign Affairs, that Washington should consider adopting a new approach toward Beijing, citing the false assumptions and narratives behind the China engagement policy since Nixon by both Republican and Democratic administrations. They all used the same playbook, underestimating the cunning ability of this Chinese Communist Party to outmaneuver Washington.

The foreign policy community is now finally awake to the fact that China is no longer in the mode of “peaceful rise” or “seeking no hegemony,” as promised in the era of Hu Jintao (general secretary from 2002 to 2012). Rather, it is actively pushing its One Belt, One Road initiative around the world.

Most alarmingly, China is building military bases in disputed territories in the South China Sea. In the face of Washington’s effort to reduce its trade imbalance with China, Beijing is resisting with stiff retaliation, biting the very helping hand that has been feeding it since Nixon. Despite being the world’s biggest exporter, owning over 13 percent of total world exports, China isn’t a market economy; worse still, it is now setting its own rules and using business to coerce the international community to agree to its terms.

What, then, should Washington do, given the obvious elephant in the room? Professor Graham Allison of the Kennedy School of Government at Harvard University wrote of his belief that bloodshed between China and the United States is inevitable, using his sobering analogy of the infamous “Thucydides Trap”—the thesis that wars occur when rising powers threaten established powers.

Professor Arthur Waldron at University of Pennsylvania, however, cautioned in a review of Allison’s book that “the reality, however, is that Allison’s recipe is actually a recipe for war.”

“Appeasement of aggressors is far more dangerous than measured confrontation,” Waldron wrote. “When it comes to China, we might want to be more mindful of the ‘Chamberlain Trap’ after the peace-loving prime minister of England, one of the authors of the disastrous 1938 Munich agreement that sought to avoid war by concessions, which in fact taught Hitler that the British were easily fooled. That is the trap we are in urgent need of avoiding.”

Allison’s proposed “Thucydides Trap,” even if it were true, is not due to the mere threat of a rising superpower to the existing one; rather it is fundamentally due to the clash of two opposing ideologies or, more specifically, the irreconcilable conflict between totalitarian communist regimes and capitalist democracies.

Over the years, various Western business and academic interest groups have, with some success, painted China as a rosy, strategic partner or one that is distinctly different from the former USSR—thus ignoring, perhaps willfully, the fact that China is a similar party state.

The Chinese political system is actually modeled after that of the USSR, and it has, in fact, strengthened the system, having drawn lessons from the collapse of the USSR. The current Chinese communist system differs not one bit in its political objective from that of the USSR: worldwide communism. If anything, this regime will likely prove to be far more formidable and wily.

Much in the same vein as the former USSR, the Chinese Communist Party has set up propaganda departments controlling information, built up similar gulag-like labor camps for prisoners of conscience, taken tens of millions of innocent lives, centralized all major economic sectors, and supported pro-Beijing communist factions in many developing countries. Above all, it shows up in opposition to Western values and efforts around the world, whether in North Korea, Iran, or Africa.

No matter what brand of Western suits is being put on by the Chinese leaders, they profess to be loyal communists unapologetically. The fact that China is currently a socialist state with Chinese characteristics, and ultimately en route to communism, is prominently stated in China’s constitution.

It is time to deal with Beijing from a realist’s perspective, not that of an illusionist any longer. At a recent Aspen Security Forum, FBI Director Christopher Wray issued a stern warning, calling China “the broadest, most significant threat to the U.S.” and complained about its espionage being active in all 50 states.

At the same forum, a CIA official, according to CNN, declared, “The goal of China’s influence operations around the world is to replace the United States as the world’s leading superpower.”

The gloves are off now. China is a Communist Party-state, resembling very much the former USSR in soul and spirit, and we should not pretend that it is not. We should also bear in mind that all communist leaders are morally weak and inferior, for these dictators know that they are on the opposing side of their people—and this is why they impose all sorts of draconian control over them.

America must keep its moral courage to stand up to any dark forces that may undermine the universal values as enshrined in the U.S. Constitution and in the U.N. Universal Declaration of Human Rights. Upon arriving in America, I soon recognized two greatest assets of this great country: 1) its material wealth; 2) its democratic institutions provided by the founding fathers.

Yet, as proven over the past three centuries, it is the second that brings about the first, not the other way round. As wisely stated by Confucius, “The gentleman understands what is right, whereas the petty man understands profit.”

With suggestions in the air of appeasing the Chinese communist regime and of putting business interests before national character, Washington must avoid the “Chamberlain Trap” as sternly reminded by Waldron. Falling into that trap would inevitably lead to the surrender of human dignity and the horror of turning George Orwell’s “1984” into reality, not just for America, but for the entire world. We cannot let that happen.

Peter Zhang focuses his research on political economy in China and East Asia. He is a graduate of Beijing International Studies University, the Fletcher School of Law and Diplomacy, and the Harvard Kennedy School as an Edward Mason fellow.