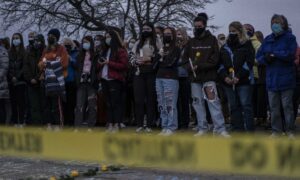 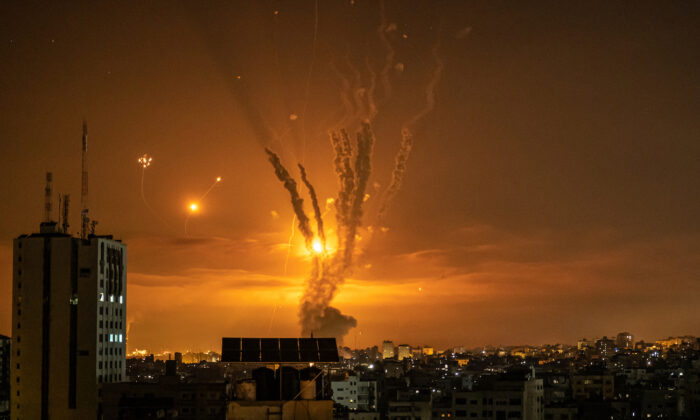 A photograph shows rockets launched towards Israel from the northern Gaza Strip in Gaza City, Gaza, on May 14, 2021. (Fatima Shbair/Getty Images)
Viewpoints

Moral Clarity Versus Moral Depravity in Israel and Gaza

The latest flare-up of violence between Israelis and Palestinians is no different. The proximate causes are a thorny combination of an abstruse housing dispute in northeastern Jerusalem, deceitful Palestinian slander about an ostensible threat to Al-Aqsa Mosque, the destabilizing nature of Israel’s current domestic political morass and the contemporaneous American appeasement in Vienna of the Palestinians’ preeminent jihad bankroller, the Islamic Republic of Iran. But the immediate aggressors, as per usual, are clear: Hamas, the internationally recognized Gaza-based terrorist outfit whose founding charter calls for the murder of every Jew worldwide, and the Fatah-dominated Palestinian Authority, ruled in profoundly corrupt fashion by serial jihad-inciter Mahmoud Abbas, a Holocaust denialist now in the 16th year of his four-year term.

The result has been the worst bout of bloodshed since the last full-scale Israel-Hamas war in 2014. Hamas has fired thousands of rockets into the Jewish state, seeking—and, tragically, occasionally succeeding—to inflict maximal harm upon Israel’s civilian population. Hamas’ rockets do not discriminate on the basis of age, race, or religion: Victims include an Israel Defense Forces soldier, a 6-year-old boy in the oft-targeted Gaza border town of Sderot, and a 32-year-old Indian national in the southern Israeli city of Ashkelon. One would be waiting in vain for Black Lives Matter, or other leading institutional wokesters and intersectional shakedown artists, to reconcile such calamities with their professed principles.

When it comes to some contentious issues, dogmatic ideology or blind zeal can prevent reasonable people from assessing a situation through the lens of prudence, which Aristotle recognized as the queen of the virtues. But this does not apply to the plight in the Levant—to the Palestinians’ century-long civilizational jihad to destroy the world’s sole Jewish state. In this latest round of recriminations and escalations, there is a side that is in the right and a side that is in the wrong.

Israel, a first-world nation-state and global technological hub with ascendant geopolitical and diplomatic clout, is in the right to exercise its sovereign right to defend itself from the predations of a thuggish Palestinian Authority and a genocidal Muslim Brotherhood offshoot; Ramallah’s deceitful inciters of Temple Mount jihad and nationwide anti-Jewish pogroms, along with Hamas’ murderous petty tyrants, are in the wrong. To anyone with a functioning moral compass, this stark dichotomy ought to be intuitive and obvious.

Alas, this past week has highlighted just how utterly depraved the leftist moral compass actually is. Rep. Ilhan Omar (D-Minn.), a longstanding anti-Semite and co-founder of House Democrats’ de facto Hamas Caucus, outrageously tweeted that Israeli air strikes in Gaza against military targets amounted to “act(s) of terrorism.” Omar’s partner in crime and Hamas Caucus co-founder Rep. Rashida Tlaib (D-Mich.) joined in the intersectional fun, opining, “What they are doing to the Palestinian people is what they continue to do to our Black brothers and sisters here” in the United States.

Ben Rhodes, the failed novelist-turned-former Obama staffer who attained outsized notoriety in foisting the vile Iran nuclear deal upon an American polity that rightfully opposed it, seized the moment not to stand in solidarity with our Israeli allies but to openly muse what the world looks like “through the eyes of a Palestinian child.” Twitter CEO Jack Dorsey, meanwhile, saw no apparent contradiction in maintaining his permanent ban of former President Donald Trump while imposing a mere 12-hour suspension on Hamas leader Ismail Haniyeh for celebrating the “bombing of Tel Aviv,” and providing a platform for blue-checked Hitler nostalgia to percolate.

President Joe Biden took a very long time to issue a mealy-mouthed statement defending Israel’s “right to defend itself”—a patronizing talking point that would never be trotted out about any other sovereign nation in the world. And a galling percentage of elected Democratic senators and congressmen, more generally, droned on about the need for Israel to exercise restraint while studiously avoiding any condemnation whatsoever of Hamas.

The American left and the media organs it controls are exporting their paroxysms of “1619 Project” rage onto a foreign stage, expiating their “white guilt” sins and armchair-quarterbacking a foreign conflict on a cosplayed chess board. In this perverse cosplay, Israel (whose Jewish population is plurality-Mizrahi, meaning of Middle Eastern, non-European descent) is the “white” Derek Chauvin; Hamas is the “brown” George Floyd. And the left will not let facts or rudimentary morality get in the way of this preferred woke narrative, even if it means increasing willingness to openly side with a terrorist group.