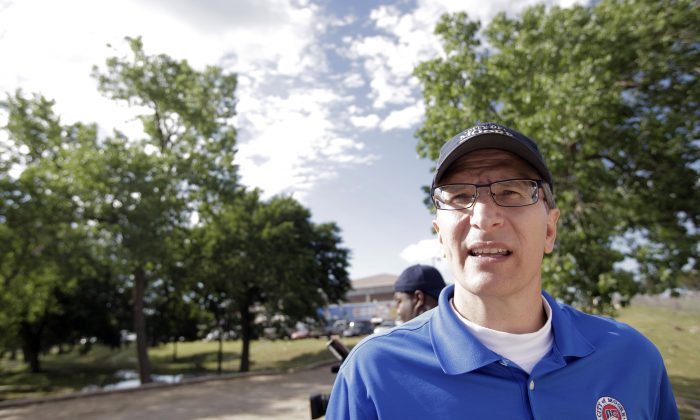 City of Moore Parks and Recreation Director Todd Jenson speaks about the overwhelming volunteer response to clean up the Moore Cemetery May 22 in Moore, Okla. The two-mile-wide Category 5 tornado touched down May 20, killing at least 24 people and wreaking extensive damage. (Brett Deering/Getty Images)
Special

WASHINGTON—As rescue teams wind up their search for victims following the devastating tornado in Oklahoma, survivors of the deadly Joplin tornado offered solace, saying the Moore community will come out stronger despite their loss.

Speaking on the second anniversary of the massive tornado that hit Joplin, Mo., on May 22, 2011, resident Julie Umphenour said the town went through an “amazing transformation” as a result and expects that Moore will show the same kind of resilience.

“It was amazing how people were able to pick themselves up—not to cry about it—pick themselves and start moving on,” she said.
While people remembered loved ones, anniversary celebrations in Joplin were not dwelling on the loss.

“Today is more a day of remembering, but remembering we moved forward from it—and we are not just a town that was destroyed by a tornado,” Umphenour said.

Volunteers were also remembered. Over 170,000 volunteers turned up in Joplin to rebuild the city after the deadliest tornado in modern U.S. history. Some stayed days, others months and even years, in support, Umphenour said. “They don’t ever forget to say thank you to all the volunteers.”

She included the many rescue workers, police, and firefighters among those providing critical support.

Like the tornado that hit Joplin, the twister that devastated Moore on Monday was rated an EF5, the highest intensity tornado rating on the Fujita scale. Over a mile wide and with winds raging up to 200 mph, the massive twister tore through 17 miles of the outer region of Oklahoma City, wiping out whole Moore neighborhoods, including two elementary schools.

At least 24 people were killed, 9 of them children.

Television footage shows scenes of absolute destruction, cars piled up like leaves, buildings broken into slivers of wood and rubble, and streets a mess of towering piles of debris.

Umphenour said her house was not damaged in the Joplin tornado, but nothing could have prepared her for the aftermath.

The multi-vortexed tornado killed 162 people and injured over 1,000, wiping out Joplin’s major hospital and community centers and creating damage that exceeded $2.8 billion.

In Moore, questions are being raised about how the rebuilding will be funded.

President Obama in a speech to the nation Tuesday said that while the extent of the damage was as yet unknown, there were “schools to rebuild, businesses and hospitals to reopen.”

“We’re a nation that stands with our fellow citizens as long as it takes,” he said, assuring Moore people that they will not be forgotten.

Oklahoma Republicans, Sens. James Inhofe and Tom Coburn have an established record of opposing federal funding for disasters. The two voted no to last year’s $60.4 billion aid bill for victims of Hurricane Sandy, but are looking at ways federal aid could be provided to Moore.

Inhofe told reporters that his concerns about funding for Sandy centered on the many extraneous projects attached to it. Funding for Moore is “totally different,” he said on MSNBC, Tuesday.

Coburn says he supports aid for Moore, as long as the funds are drawn from other areas of the federal budget and are not additional.

Critical in the rebuild will be more safe shelters. Moore lies in Tornado Alley, which stretches roughly from northern Texas, Oklahoma, and Kansas, and is known for its strong tornadoes. The town of 55,000 people has had 4 tornadoes in 15 years, and according to the National Weather Service had the strongest tornado ever recorded on the planet in 1999, with wind speeds reaching up to 302 mph.

The Oklahoma City is short on safety shelters, however. A new $2 million “safe room” program, in the planning for decades and one the city had hoped to start soon, is still waiting hazard mitigation plan approvals, according to a February post on the Moore City website.

In Emergency Management, Moore city recommends below-ground shelters as the best practice for protecting against tornadoes.

“Unfortunately, few homes in Moore have basements, and only about 10 percent or less have below-ground storm shelters,” the website states.

Seven of the nine children killed in the tornado Monday were at school huddled against a wall, their elementary school without a secure above-ground or below-ground safety shelter.

Umphenour said that before the tornado, residents in Joplin were casual about tornadoes. Fewer houses or buildings had shelters and people regularly ignored alarms.

On the day the tornado hit, tornado alarms started at 10 a.m., and continued all day. “That’s why so many people were injured,” she said, “We were just so used to the tornado sirens going off, we were just like ‘whatever.’”

Not anymore. “Now, it is like complete panic,” Umphenour said, describing the atmosphere downtown last Monday when sirens started going off.

Today, more people have shelters and, more importantly, they have a game plan of where to go and what to do.

“Now you are mindful and far more prepared,” she said.

Kristin Meriwether contributed to this report