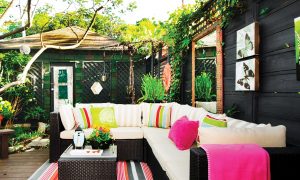 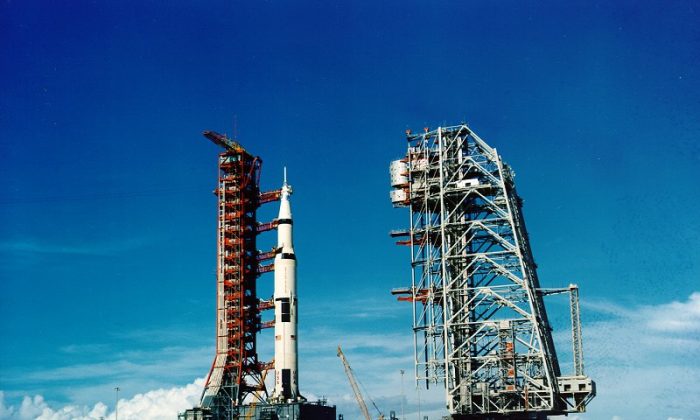 The Saturn V rocket that launched Neil Armstrong, Buzz Aldrin and Michael Collins on their Apollo 11 moon mission at Cape Kennedy, Fla., on July 16, 1969. (Courtesy of NASA)
US

Reflecting on How Moon Landing Impacted History as Anniversary Approaches

Neil Armstrong took his small step onto the moon on July 20, 1969. America has stepped away from the space program since then. Yet the innovations that grew from that mission transformed communications, computing, and most importantly, how people understand Earth’s place in the universe.

“The single most important thing that came out of the Apollo program … on the way to the moon, we discovered the Earth,” said political consultant Gerry O’Brien. The image of the lovely, cloud-wrapped blue marble is ubiquitous today. It’s easy to forget that it was a revelation in 1969.

When the astronauts filmed our home from thousands of miles away, “It was the first time people could see just how fragile, how small Earth was in space,” said O’Brien. It’s not a coincidence that Earth Day was established the next year, along the Clean Air Act. The Clean Water Act was passed in 1972.

Now we have an even stronger sense of how tiny Earth is in the world, because we know there are billions of other planets. The technology NASA had to develop to get to the moon made the discovery of those planets possible.

It started with President John F. Kennedy planting the flag. In 1961, he said:

No one knew how that goal would be accomplished. It’s like a person resolving to run a marathon or climb Mount Everest the next year, according to O’Brien. Promising to reach a goal without knowing how it will lead a person to develop the means to reach the goal. That happened for NASA.

“The Soviets always had the more powerful rockets in those days—in the late 1950s and early 1960s, Soviet R7 and Vostok rockets could lift ten times as much as America’s Jupiter C and Redstone rockets,” wrote O’Brien in an email.

Our inability to match the lift power of Soviet rockets spurred America to make things smaller and lighter.

Having wimpier rockets forced the engineers to develop integrated circuits. Otherwise, the equipment on the rockets would have been the size of a basketball court, and impossible to launch, according to O’Brien. Those circuits made personal computers and cellphones possible.

“So much of what we take for granted today in communications is a direct result of money spent on space,” said O’Brien.

Jay Barbree shares that opinion. Barbree wrote “Neil Armstrong: A Life of Flight,” a biography of the astronaut and the effects of the lunar program. He is also NBC’s Emmy Award-winning space correspondent. He said he always tells young people, “You would not have the technology we enjoy today had we not been to the moon.”

Speaking of what the early space program sparked, he said, “Most scientists I talk to say we leapfrogged 50 years ahead,” because of the lunar program. “Primarily computers—the computer on Apollo 11 had less computing power than our handheld devices.”

To him, learning about space is essential. Though NASA is still funded well enough “to get the job done,” he criticized what he called current practices, less focused on innovation and more focused on selfish ends.

“There are too many politicians involved,” he said. “They are carving out a little bit for themselves and not enough is left over for exploration.” Now NASA shares with private contractors. He’d like to see commercial space flight kept separate from government initiatives. No space contractors.

“There is a big role for private commercial space, but it should be private,” said Barbree. People are welcome to pay a fortune to go up in space, though they do not have all their oars in the water if they spend their money that way, he said, with a laugh. When aviation was developed, commercial airlines stood on their own feet, separate from government flight, and so should commercial space flight.

“If NASA would put its focus back on adding to the trove of knowledge—look at all we’ve learned from Hubble,” the giant telescope, said Barbree.

Beyond abstract exploration, it’s crucial to learn how to deflect roving asteroids before another one like the one that killed the dinosaurs comes along, according to Barbree. One hit Jupiter recently that would have destroyed our habitable atmosphere, he said.

As Armstrong said, the moon landing was a step for all mankind. It made him happy when he went on tours around the world, and people would jump up and down and say ‘We went to the moon,’ according to Barbree. He was glad they regarded it as a shared accomplishment, not just an American accomplishment.

Dr. Ben Bova also calls for more space exploration. The award winning author “has been involved in science and high technology since the very beginnings of the space age,” according to his Web page. He is President Emeritus of the National Space Society and a past president of Science Fiction Writers of America.

To him, the lunar program’s “biggest impact is it has opened up the solar system to us.” Our solar system is a potential New World, without any Indians to harm, according to Bova. Earth is like Europe in 1492.

Space is offering us wealth and adventure, according to Bova. “Do we have the heart to go out and get it? We could make ourselves much freer, richer, and happier, if we use the resources in space.”

Just as important as potential wealth is the sense of possibility. “On an emotional level, it opens doors, it allows us scope, adventures to have,” said Bova.