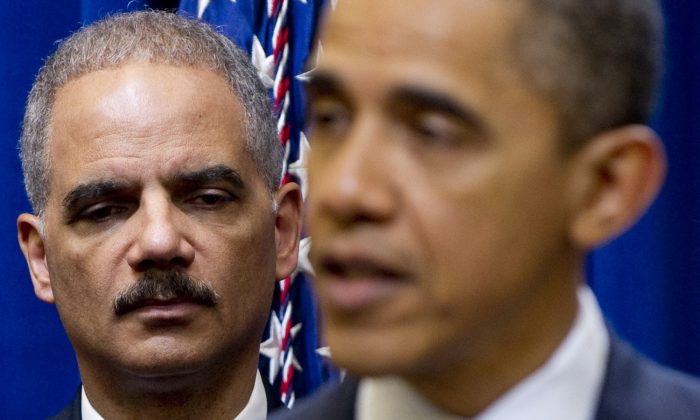 Moody’s Investors Service changed its outlook on the U.S. banking system from negative to stable, citing an improvement in the banks’ operating environment. This move, announced May 28, came as a surprise, after five years of a negative outlook and many persistent problems.

The announcement gives a thumbs up to U.S. banks from a financial perspective, but problems like “too big to fail” remain unsolved.

Some of the key systemic banks have become so big that Washington thinks they cannot be allowed to go bankrupt, even if they go against the law.

“I am concerned that the size of some of these institutions becomes so large that it does become difficult for us to prosecute them when we are hit with indications that if we do prosecute—if we do bring a criminal charge—it will have a negative impact on the national economy, perhaps even the world economy,” testified Eric Holder, attorney general of the United States, before the Senate Judiciary Committee on March 6 and published on the American Banker website.

Holder’s remark went viral with article after article dissecting his statement. Yet, a May 16 article on the Wall Street Insights & Indictments website suggests that Holder’s remark was nothing out of the ordinary, as every sitting administration and Congress, as well America’s regulators, have upheld that principle.

According to a Huffington Post article on March 6, Holder’s remark is normal, given that some of his subordinates had already acknowledged their fear to prosecute the “too big to fail” banks in the past, for reasons such as the negative effect on the economy.

What should be obvious, said the article, is that “by not prosecuting law-breaking banks, and confessing to its terror of prosecuting those banks, the Justice Department has waved a big checkered flag to the biggest banks to go ahead and break all of the laws they want.”

Senators Want a Return to Normal

In a May 14 letter to U.S. law enforcement and regulatory agencies, Sen. Elizabeth Warren (D-Mass.) asked for disclosure concerning so-called deferred prosecution agreements. These are settlements between prosecutors and companies that involve a financial penalty but no admission of guilt. These settlements avoid criminal persecution and therefore the danger to put a bank into runoff.

Warren wants to know which government agencies are adhering to Holder’s doctrine and which banks are considered above the law, some analysts suggest. A recent example of a deferred prosecution agreement is the banks’ settlements with the SEC over fraudulent mortgages. Several banks paid a billion-dollar fine, but did not admit to fraudulent activity in their foreclosure proceedings of subprime and other mortgages.

Warren suggested that settlements without admission of guilt shortchange the government while the penalty for the bank remains negligible. Also, instead of being a deterrent against future wrongdoing, such settlements send the wrong message to those contemplating wrongdoing.

Sens. Sherrod Brown (D-Ohio) and David Vitter (R-Ark.) went even further than Sen. Warren. On April 24, they announced they had introduced a bill that would put an end to the “too big to fail” doctrine. The bill is called the Terminating Bailouts for Taxpayer Fairness Act (TBTF Act).

According to a May 16 Huffington Post article, former regulators applauded the bill and off-the-record sitting U.S. regulators also approved of it. The largest U.S. banks are up in arms against it, however. The U.S. Treasury has stated off the record it won’t support the bill, as the Dodd-Frank Wall Street Reform and Consumer Protection Act will over time end the “too big to fail” doctrine.

A March 6 American Banker article suggests that the Brown–Vitter bill does not have a chance in the present Congress, as leading Democrats and Republicans do not support it.

In the article, Isaac Boltansky, an analyst with Compass Point Research & Trading, suggests, “We continue to doubt that ‘too big to fail’ legislation can pass in this Congress but Holder’s statement will unquestionably add additional momentum to the legislative effort.”

Despite the stable outlook given by Moody’s, there are risks other than the “too big to fail” doctrine.

Stanford University professor Anat Admati stated during an interview with CNNMoney that banks continue to be at risk, and another banking shock could happen unless the sector decreases its debt and disentangles from the current interrelationships between banks.

“The failure of one can take down others,” Amati said, according to a May 29 CNN article.

A major concern of banking sector analysts is that bank executives seem to be out of the loop. For example, Robert Rubin, former Citigroup Inc. chairman, claimed ignorance concerning the bank’s toxic collateralized debt obligations (an investment-grade security backed mostly by mortgages) and liquidity puts (a means to have a buyer for illiquid assets).

Given the “too big to fail” doctrine and use of deferred prosecution agreements, banking sector analysts suggest that this issue of high risks taken by banking staff has not been addressed adequately through current bank legislation and regulation.