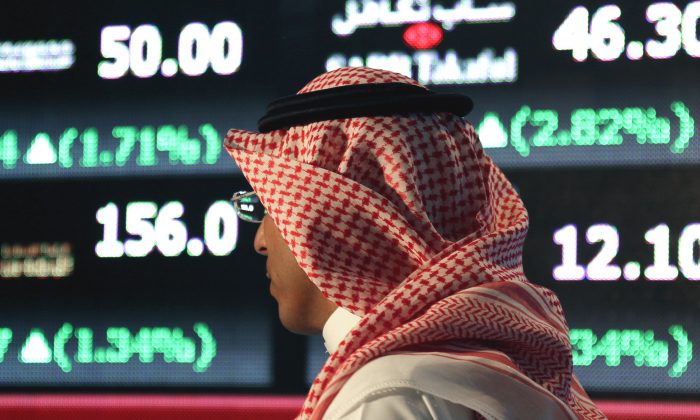 A Saudi man at the Tadawul Saudi Stock Exchange, in Riyadh, Saudi Arabia, on June 15, 2015. The Saudi economy is becoming undone by a low oil price and a strong dollar. (AP Photo/Hasan Jamali)
Business & Economy

NEW YORK—Saudi Arabia’s credit rating has been downgraded by Moody’s because of the long and deep slump in oil prices.

Saudi Arabia is the world’s largest oil exporter. Moody’s cut the country’s long-term issuer rating one notch to A1 from Aa3 after a review that began in March.

Crude prices fell from more than $100 in mid-2014 to under $30 a barrel in February, although they have recovered into the mid-$40s. Benchmark international crude settled Friday at $47.83 a barrel.

Moody’s lowered Oman to Baa1 from A3 and Bahrain to Ba2 from Ba1. The ratings agency did not downgrade Kuwait, Qatar, the United Arab Emirates or Abu Dhabi, but it assigned a negative outlook to each.

What Will Saudi Arabia’s Vision 2030 Mean for Its Citizens?

Oil prices slumped because of production that grew faster than demand. Surging production from shale operators in the United States contributed to the glut. So did the Organization of Petroleum Exporting Countries, which decided in November 2014, several months after prices began falling, to continue pumping rather than give up market share.