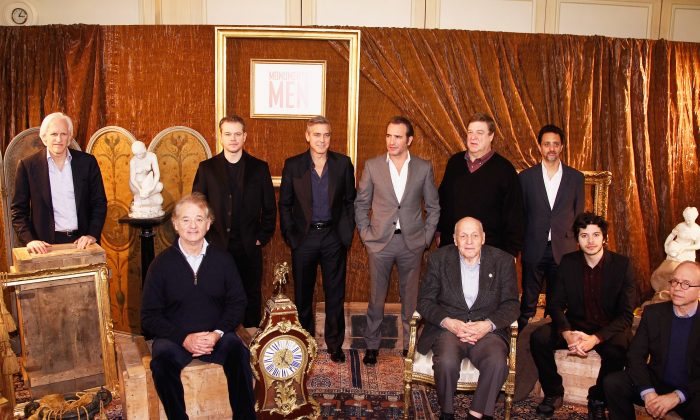 Monuments Men Are All the Rage, but We’re Still Afraid of Nazi Art

“I’m to put a team together and do our best to protect buildings, bridges and art, before the Nazis destroy everything,” George Clooney tells Matt Damon in a dimly lit bar.

The Monuments Men is one of many examples of our ongoing interest in art and the Nazi regime. Only this week we saw another controversy when dozens more paintings believed stolen by the Nazis were found in the collection of Hildebrand Gurlitt’s son, Cornelius. The V&A recently published a register of degenerate art, and there are endless restitution cases. Such stories continue to make headlines almost 70 years after the fall of the Nazi regime. But the complexity of the Nazi’s artistic legacy is rarely considered.

Art took up a disproportionately large part of the Nazis’ political agenda. For instance, on the day he invaded Norway and Denmark, Hitler was not poring over military maps, but over albums of art from European museums. Heinrich Himmler risked his career stealing artworks from foreign collections by the wagonload for his private collection, whereas Joseph Goebbels loved modernism and nearly sacrificed his position as Hitler’s right hand to defend his aesthetic sensibilities.

But despite the fact that the Nazis invested a lot of resources in ransacking Europe for its masterpieces, their taste is often described as barbaric, weak, prone to kitsch and coldness. The most prominent reason for this may be their concept of “degenerate” art.

In the summer of 1937, the Degenerate Art exhibition opened its doors in Munich. Ironically, it was the world’s greatest modern art exhibition: it is estimated that more than three million people visited the show, which subsequently toured Germany for several years. Works that had until recently hung unperturbed in Germany’s most prominent museums were now the main attraction of an artistic freak show. They were re-branded as the “degenerate” works that had poisoned the German cultural climate as part of the “judeo-bolshevist conspiracy”.

Children were forbidden to enter and those bold enough to brave the long queues were invited to ridicule and shudder at works by artists such as George Grosz or Franz Marc before they were to disappear forever.

Although they intended to “cleanse” the world from “degenerate” art forever, the Nazis actually didn’t destroy a lot of the degenerate art they took from museum and private collections. Instead, the works were stowed away in depots. So reconstructions of parts of the degenerate art exhibition are held regularly.

But the grey areas in Nazi art policy have continued to be ignored. The Nazi propaganda machine created the impression that dividing their enormous mountains of artworks neatly into two piles of “masterpieces” and “terrible, dangerous artworks” was a simple process – all one had to do was to rely on one’s “gut-feeling”, any Aryan could do it, according to Hitler.

In reality, a struggle took place over several years. No one, not Himmler, Goebbels, Hitler or anyone else, appeared to agree on what Aryan art was supposed to be. Surprisingly, for a while it even looked as though Expressionism was to become the Nazi style of choice, even though in the end it was heavily featured at the degenerate art exhibition. Nazi art policy was so confused and self-contradictory that it had very little to do with either ideology or aesthetics in the end.

After the war, it was not only that art began to be viewed in different terms. Instead, an inversion took place: degenerate art was elevated to a morally superior status, whereas art commissioned by the Nazis was deemed so bad and threatening that it was stowed away in depots, bunkers or destroyed.

“Degenerate” artists such as Ernst Barlach were suddenly attributed a near martyr-like status, their art and their morals rehabilitated in one fell swoop, despite the reality being a lot more complicated. It is rarely mentioned, for example, that Barlach was close friends with a high Nazi official and had officially pledged his allegiance to Hitler in a national newspaper in 1934.

Meanwhile, Hitler’s favourite sculptor, Arno Breker, had actually struggled with accusations of degeneracy and “foreignness” until 1936. He even created the death mask of the notable Jewish impressionist Max Liebermann. Yet it was this incredibly complex figure who became the uncontested superstar of the Nazi art world.

Despite this complexity, showing Breker’s work in an objective setting appears to be impossible today. The Schleswig-Holstein Haus, a museum in the German town of Schwerin, tried to do so in 2006 and attracted international criticism for its nuanced approach.

Artworks commissioned by the Nazi regime have not lost their threatening aura after 70 years. The strict ban of the past decades on showing Nazi art is only slowly being lifted, and you cannot simply head to Berlin and look at some Nazi art to get a history lesson.

Instead, it is to be rejected out of hand, both aesthetically and morally. Apparently we do not trust the public to make this judgement for themselves. A lot of these artworks are at least 70 years old, but they are still more threatening than the bloodiest, most visceral piece of shock-art could ever hope to be.

Nausikaä El-Mecky does not work for, consult to, own shares in or receive funding from any company or organisation that would benefit from this article, and has no relevant affiliations. This article was originally published on The Conversation. Read the original article.