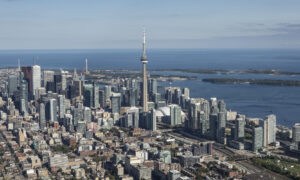 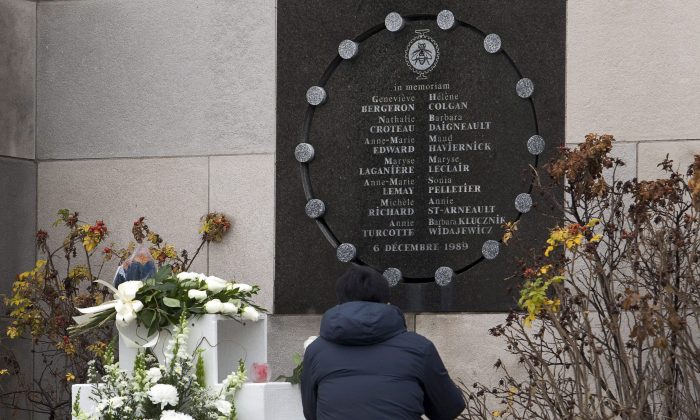 A man pays his respects at the memorial plaque at Ecole Polytechnique on Dec. 6, 2011, the 22nd anniversary of the Montreal massacre. The Dec. 6, 1989, massacre is still creating sharp political divisions on Parliament Hill over the nature of the crime and the proper response to it. (The Canadian Press/Ryan Remiorz)
Canada

OTTAWA—Twenty-five years after Marc Lepine killed 14 women at Montreal’s Ecole Polytechnique, the massacre is still creating sharp political divisions on Parliament Hill over the nature of the crime and the proper response to it.

Gun control remains a polarizing element of the discussions. While families of the victims and supporters demand tighter regulations, the Conservatives have argued that law-abiding Canadian gun owners should not be treated like criminals.

A bill is currently making its way through the Commons that reclassifies certain weapons and eases transportation restrictions around firearms, among other measures. The government eliminated the long-gun registry two years ago.

“Only our Conservative government will always stand up for Canada’s hunters, trappers, and sports shooters,” MP Robert Sopuck said in the Commons Tuesday, Dec. 2.

Merely defining what happened on Dec. 6, 1989, is also a sensitive topic.

Justice Minister Peter MacKay sparked opposition derision Tuesday when he spoke in the Commons about the “horrific” events, but left out any reference to Lepine’s self-professed hatred of women.

“And while we may never understand what occurred, why this happened, why these women were singled out for this horrific act of violence, we have to stand together,” MacKay said during question period.

“We have to work continually to support victims, to hold offenders accountable, and we are creating a safer and more secure country by doing so.”

The remark prompted NDP Leader Tom Mulcair to invite MacKay to explain himself.

“We know why this happened, we know why they were singled out—it’s because they were women,” Mulcair told the House. “That’s what Marc Lepine wrote in his manifesto.”

Lepine wrote in his suicide note about “sending feminists…to their Maker,” and about how they had enraged him. The debate over whether Lepine’s actions were that of a misogynist, constituting a hate crime, or just a violent, disturbed criminal raged on for years in Quebec.

Today, most coverage in the media—including a recent article in the New York Post—describes Lepine as a misogynist.

MacKay responded by accusing Mulcair of politicizing the issue, saying “of course they were singled out because they were women.”

Mulcair followed up by urging the government to withdraw Bill C-42, saying once passed it will make it easier to transport and possess the very same weapon Lepine used in 1989.

After question period, MacKay said the massacre would never be understood “because of the insanity and the level of violence.”

Ascribing motives to violent acts has been a burning issue on Parliament Hill for a while—even more so since Oct. 22, when Michael Zehaf Bibeau killed Cpl. Nathan Cirillo in cold blood before dying in a gunfight in the Centre Block.

While the Conservatives quickly declared Zehaf Bibeau a terrorist, others, including Mulcair, have been reluctant to apply that label. Both Mulcair and Green party Leader Elizabeth May have pointed to Zehaf Bibeau’s mental health as a factor in the shootings.

Public Safety Minister Stephen Blaney also spurred controversy this week around the Dec. 6 anniversary when he said the best way to mark the occasion was to support women in engineering. The victims of the massacre were mostly engineering students.

“For me, the best response that we can have to this terrible act is to make sure that women choose the engineering profession and refuse to entertain this backwards discourse that goes against our Canadian values.”

Liberal Leader Justin Trudeau said Tuesday that the Conservative government doesn’t understand what happened in Montreal 25 years ago nor the importance of taking action in response.

“I think Mr. MacKay should spend some time speaking to the survivors of Polytechnique and he’d give better answers in the House of Commons,” Trudeau told reporters.