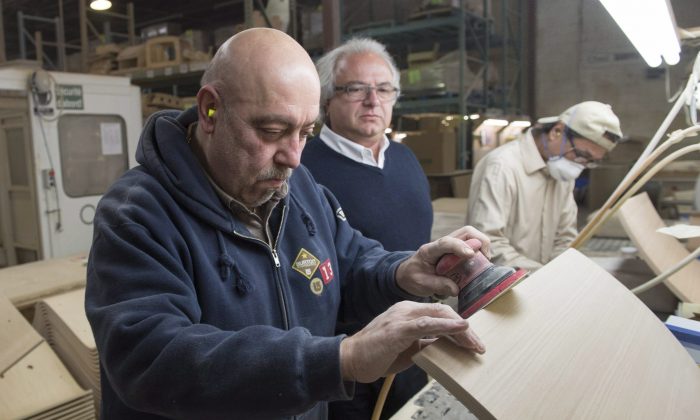 Tips on integration are also freely offered
By The Canadian Press

MONTREAL—When Syrian refugee Garouj Nazarian is asked how he likes working for his boss, the answer comes in choppy English—but the sentiment shines through.

“So much good,” he says with a big smile, offering a thumbs-up to emphasize his joy.

Nazarian, who’s been in Canada for about a year, has been working for six months at a Montreal plywood factory owned by Levon Afeyan, who fled Lebanon’s civil war with his parents and two brothers in 1975.

“I like working here very well,” Nazarian says in English before finishing his answer— “to take care of my family”—in Armenian.

Nazarian is one of 12 Syrian refugees among 80 employees at the factory, and Afeyan intends to hire more as Canada opens its borders to thousands of people fleeing the Assad regime and ISIS.

Afeyan says one of the most difficult things for the Syrian refugees he employs is to accept that their move to Canada is likely a permanent one.

“They haven’t grasped that yet,” he says. “It takes time for a man to accept the fact that, well, this is it. I’ve lost (everything).”

Afeyan is the boss, but he’s also a pseudo-social worker, overseeing a factory where immigrants from conflict zones around the world earn money for their families but also learn life skills and are paid to take French lessons.

His business, Seatply Products Inc., makes curved plywood used in chairs throughout North America. The employees press plywood and glue veneers to create colourful combinations. They also cut and drill the wood with robotic machines and, while most of the production doesn’t require an advanced skill set, it’s work.

They need a job to have respect.
— Levon Afeyan, owner of Seatply Products Inc.

“They need a job to have respect,” Afeyan says. “Respect is a big thing in the Middle East. A man has to be a respectable man. Without a job he doesn’t have that.”

The low price of oil and the sinking dollar have triggered many layoffs across the country, but for Seatply it’s time to hire.

On a tour of his factory, Afeyan intercepts Vasudevan Ratnasingham, from Sri Lanka, a country whose civil war ended in 2009 after 26 years. Ratnasingham has become the supervisor of the pre-pressing veneer department.

Nearby is Vrej Baboian, a refugee from Iraq who moved to Canada in 2009. The former car engineer is a sort of mentor to many Syrians who have started working at Seatply.

“We saw a lot of talent in him,” Afeyan says. “He became supervisor of his small team, then floor manager. Now he’s a full-fledged foreman in one of our departments.”

Baboian, his walk brimming with confidence, says his first piece of advice to refugees is simple: “Find a job. Don’t depend on the government, depend on yourself.”

Afeyan believes refugees are often in shock when they arrive and adds that finding a job is critical to integrating successfully.

“We have to give them time,” he says. “Let them talk about it and slowly come to the realization that ‘I am now a full-fledged Canadian. My children will become Canadian. And Canada is my new home.'”

Afeyan intends to hire more as Canada opens its borders to thousands of people fleeing the Assad regime and ISIS.

Essential to feeling Canadian, Afeyan adds, is to start speaking English and, particularly in Quebec, French. Starting in March, a teacher subsidized by the Quebec government will offer French lessons twice a week for free—inside the factory.

Afeyan’s employees have to stay an extra hour before or after their shifts to learn French, but they are paid to do so.

“We will encourage all of them to take the class and we’ll tell them not to say no,” he says with a smile.

And aside from language, Afeyan and his managers also teach refugees about elements of daily life other Canadians take for granted, such as efficient driving.

“We teach them about carpooling,” he says. “This is a concept they have never heard about. They like it very much, by the way.”

While all Canadians can’t offer refugees jobs, they can help their integration by accepting displaced Syrians “not just as refugees but as new Canadians,” Afeyan notes.

He remembers what it felt like to be 16 years old and living in a new country.

“The best thing that ever happened to me is that one of my friends’ parents invited me to their dinner,” he recalls.